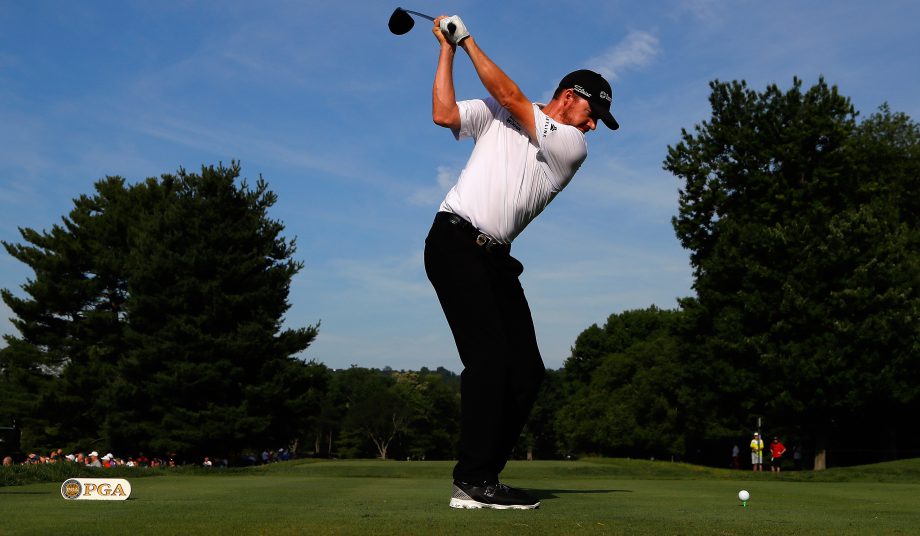 SPRINGFIELD, N.J. – A drab year for Jimmy Walker took a turn for the worse two weeks ago at the British Open, when he stayed in what was dubbed the “frat house” at Royal Troon with Jordan Spieth, Rickie Fowler, Justin Thomas, Jason Dufner and Zach Johnson.

Walker was the only one to miss the cut.

He still stayed the weekend. He just stayed away from the golf course, and his clubs. How does one kill time in such a small Scottish town?

“When the first guy comes back and he’s ready for a cocktail, you have one,” Walker said.

Thursday in the PGA Championship, the drinks were on Walker.

In the final major of the year, Walker finally saw enough putts to fall at Baltusrol that he matched his low score in a major with a 5-under 65 and wound up leading a major for the first time in his career.

Just like that, a stale year came to life.

And for Henrik Stenson, a great year might get even better. Coming off his record performance at the British Open, the Swede had three birdies on the back nine as the sweltering heat gave way to dark clouds and 20 mph gusts. That gave him a 67, leaving him two shots behind. Stenson is trying to join Ben Hogan in 1953 as the only players to win back-to-back majors at age 40.

“It’s going to be a great season for me,” Stenson said. “But at the same time, I want to give myself a chance to try to make it the best season.”

It wasn’t the best of times for Dustin Johnson or Rory McIlroy.

Johnson, the U.S. Open champion with a chance to go to No. 1 in the world, was in the trees, in the water and couldn’t get out of a bunker. He managed only one birdie in a round of 77 that wasn’t enough to beat 15 of the club pros at Baltusrol.

He wasn’t alone in his misery. McIlroy took 35 putts and didn’t make a single birdie in his round of 74 that left him so frustrated that he returned to Baltusrol late in the day with only his putter.

Walker’s year has been so mediocre that he has finished within five shots of the winner only once this year, at Torrey Pines. He is on the verge of falling out of the top 50 in the world ranking and hasn’t given as much thought to Ryder Cup with qualifying a month away from ending.

“I feel like all year it’s just been real stale and stagnant,” Walker said. “It’s just ebbs and flows of golf. Just haven’t been scoring. … It’s frustrating. I would have loved to have had a better year than I’ve had so far to this point, but I know there’s always time to play well at the end of the year.”

Kaymer had the best score in the afternoon, when the blend of poa annua and bent grass on the Baltusrol greens became a little more difficult to navigate.

Baltusrol still allowed for good scoring. Twenty players were at 68 or better, a list that included defending champion Jason Day.

Day played in the morning group with McIlroy and Phil Mickelson, and he was the only player without much stress. Mickelson, just 11 days after that magnificent duel with Stenson at Royal Troon, was 4 over through 11 holes when he rallied with a trio of birdies late in his round to salvage a 71.

“It’s not the start I wanted. It’s not indicative of how I’m playing,” he said. “But I’m back to where tomorrow, if I play the way I’ve been playing, I should be OK.”

Jordan Spieth only regretted one hole, the par-4 seventh, when he lost his ball so far to the right he had to chip back into thick rough and wound up three-putting for a double bogey. That was his lone mistake. He rolled in big putts on the 15th for par, 16th for birdie and closed with a two-putt birdie to get back to even-par 70.

Grillo had a chance to at least join Walker in the lead when he was at 4 under with the final two holes par 5s. He made par on both. Fisher made birdie on the two closing par 5s for his 66. Kaymer started his afternoon round on the back nine and kept it together with two pars, including a 35-yard bunker shot on No. 8 to within 3 feet.

“There’s nothing easy on the golf course today,” Kaymer said. “I just didn’t miss many fairways and therefore, you can create some birdie chances. But at the end of the day you still need to make the putts.”

Walker kept the ball in play off the tee until late in his round, and he was particularly sharp with his scrambling out by getting up-and-down six times.