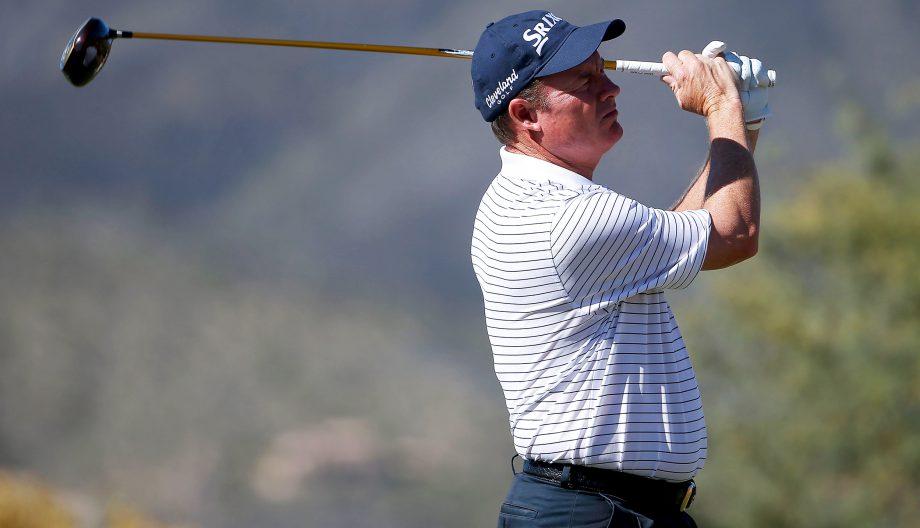 KAUPULEHU-KONA, Hawaii – Joe Durant shot a 7-under 65 on Thursday to take a one-stroke lead in the PGA Tour Champions’ season-opening Mitsubishi Electric Championship.

The 51-year-old Durant had nine birdies and two bogeys at Hualalai Golf Course. He teamed with Billy Andrade last year to win the Legends of Golf for his first title on the 50-and-over tour.

“I putted beautifully and I think that was kind of the key,” Durant said. “Made a couple good putts right out of the gate and, yeah, I was real happy. The wind was a little tougher today, it was a little heavier and it was definitely a lot stronger than we had the two pro-am rounds. It was a little different animal today.”

“I hit a couple bad drives, but other than that I hit the ball real solid,” Love said. “I made, I guess really, one or two tough putts, longer putts, but really just hit it well enough that I had a lot of birdie chances and got the par 5s. Other than one bogey, pretty good solid day.”

Love played in the PGA Tour’s Hawaii events the last two weeks. The U.S. Ryder Cup captain tied for 29th at Kapalua in the Hyundai Tournament of Champions and made the 36-hole cut but failed to advance to the final round in the Sony Open in Honolulu. He won the PGA Tour’s Wyndham Championship in August at 51 years, 4 months, 10 days to become the third-oldest champion in tour history.

“The first two weeks identified things I needed to work on,” Love said. “It’s good, I’ve been playing. I played four rounds at Kapalua, three at Sony, so I’ve gotten the rust off and feeling better about my game.”

“I hit the ball really consistent,” Roberts said. “I hit a lot of greens today and, if I did miss a green, it was just right off the edge and it wasn’t bad. I actually missed some putts. I missed it from like 4 1/2, 5 feet three times today for birdies.”

The event features major champions from the last five years, tournament winners in the last two seasons and sponsor invitees.

“I’ve watched this tournament on television several times and I remember Loren shot something ridiculous one year and seems like every year there’s some pretty low scores,” said Durant, a four-time winner on the PGA Tour. “You’ve got to get 15 to 20 to even have a shot at it, especially if the wind lays down at all.”

Colin Montgomerie and Fred Funk were in the group at 68. Funk tied for 50th in the Sony Open.

Bernhard Langer and Fred Couples shot 70. Langer, the winner in 2009 and 2014, used a long putter without anchoring it to his body. The event is Langer’s first since the anchored stroke was banned Jan. 1.

Vijay Singh had a 72 after tying for 50th in the Sony Open.