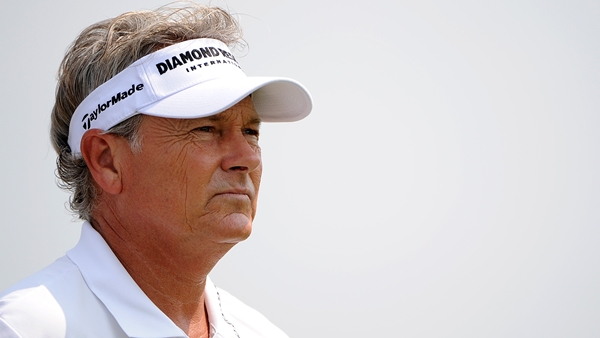 ENDICOTT, N.Y. – John Cook birdied the final two holes for a 7-under 65 and a share of the first-round lead with Olin Browne on Friday in the Champions Tour’s Dick’s Sporting Goods Open.

The 56-year-old Cook had eight birdies and a bogey on the En-Joie course. He won the last of his nine titles on the 50-and-over tour last year in the season-opening event in Hawaii.

Cook missed 10 weeks of the season after injuring his back in a February fall at his Florida home. He made an 8-foot putt on the par-3 17th and a 25-footer on par-4 18th.

“I was really excited for this year, then (after the injury) I got really down,” Cook said. “I didn’t know when I was going to be able to play again.”

Surgery wasn’t necessary, but the layoff left some rust that had to be worked off.

The 55-year-old Browne birdied five of the last seven holes in a bogey-free round. He won the 2011 U.S. Senior Open for his lone Champions Tour victory.

“Sixty-five is a great start,” Browne said. “I played really nice golf today. I hit a fair number of fairways and greens and I had a lot of good looks at birdies. And this course, the greens can be a little tricky, so I hit a lot of good putts that didn’t go in. I misread a few of them. I’ve never really played that great here even though I really like the golf course, so it’s a good start.”

“I happened to get some putts where what I saw matched up with what actually happened,” Browne said. “I thought the hole locations today were really, really good and they’re on the sides of some of the greens so when you get holes in the middle of the greens that tend to be flatter, you get them toward the corners and you can actually see the breaks. I just felt like I was able to see the breaks better on the back.”

Defending champion Bart Bryant was a stroke back along with Steve Lowery and David Frost.

The 50-year-old Austin is making his second Champions Tour start after making his debut with a tie for third in the U.S. Senior Open. He has played 22 PGA Tour events this season.

“I got off to a perfect start,” Austin said. “I hit a perfect tee shot on the first hole and then I hit it to about 10 inches, so you can’t get off to a better start than a putt you can make blindfolded and something that gets you going into the round.”

Rob Spittle is the leading Canadian. He’s tied for 16th after carding 68 in opening round. Jim Rutledge shot 74 and it tied for 61st.