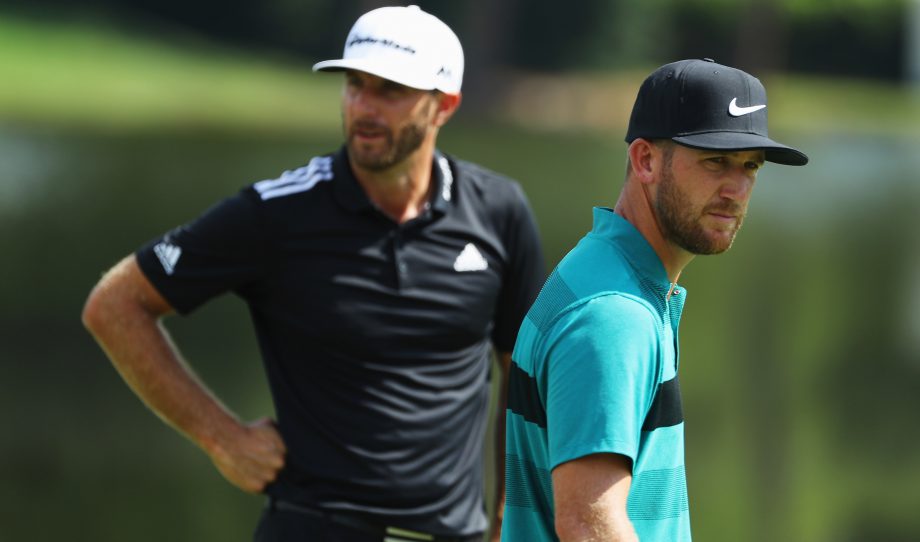 ATLANTA – Dustin Johnson had a reasonable lie in the rough and only a few pine tree branches blocking his path to the 17th green. Neither seemed like a problem until he played the wrong shot, clipped the tree and wound up with a double bogey Saturday in the Tour Championship.

It was an example of how one hole can change everything at East Lake.

And it’s why the final round of the PGA Tour season suddenly has more scenarios than Johnson cares to consider.

Johnson recovered with a birdie from the bunker on the par-5 18th for a 1-under 69, giving him a share of the lead with Kevin Chappell (68) going into the last round that will determine who wins the Tour Championship and the FedEx Cup.

For the first time since 2009, there’s a chance it might not be the same player.

“There’s a lot of scenarios that could happen,” Johnson said. “But yeah, I’m still going to go out and try to shoot as low a score as possible.”

Johnson only has to win or finish second alone to claim the $10 million bonus as the FedEx Cup champion.

Rory McIlroy, who has gone 28 holes without a bogey at East Lake, had three birdies over his last six holes for a 66 and was two shots behind. If he were to win the Tour Championship and Johnson finished in a two-way tie for second or worse, McIlroy would claim the FedEx Cup.

“It would just be great to try to win the Tour Championship, and if the chips fall my way, then so be it,” McIlroy said.

Johnson led by as many as four shots when he ran off three straight birdies on the front nine, and he really didn’t do much wrong to give up the size of that lead. He had a three-putt from 70 feet on No. 13, and missed the fairway by a few feet on the next hole, enough that his ball was buried so deep that even Johnson and his power couldn’t advance more than about 135 yards.

It was the 17th hole that reshaped the tournament.

Johnson tried to played a fade from a flyer lie in the rough, and the ball came out high and hit a branch, leaving him in more rough about 60 yards short of the green. He put that in the bunker, blasted out to 6 feet and missed the putt to make double bogey.

Chappell rolled in a 10-foot birdie putt for a three-shot swing on the hole and suddenly had the lead, only for Johnson to catch him with the final birdie.

Chappell, a runner-up three times this season who has never won on the PGA Tour, has made only one bogey in 54 holes this week, a show of consistency, discipline and a few good breaks when he does miss the fairway.

His next chance at a breakthrough victory is to face golf’s best player at the moment (Johnson), with McIlroy and Ryan Moore (66) two shots behind.

“I’ve always kind of been the underdog, so it’s a role I’m comfortable in,” Chappell said.

Moore went out in 31 until he was slowed by a pair of bogeys, though very much in the mix just two shots out of the lead. The mystery is whether anything he does on Sunday – even if that means a victory – is enough for Davis Love III to use his last captain’s pick on Moore for the Ryder Cup.

“I came here this week to win a golf tournament, and I’m 100 per cent focused on that,” Moore said, adding that the Ryder Cup is “completely out of my control.”

And that’s how the last day is shaping up for everyone – post a score and see where it leads.

Johnson, for a moment, looked as though he might take all the drama out of the season-ender when he made a 15-foot par putt early in his round and then ran off three straight birdies on the front nine to go four shots clear.

The putter cooled off, however, and Chappell stayed in range.

Chappell chipped in on No. 12 to match birdies and stay three shots behind, and then he quickly closed the gap when Johnson made back-to-back bogeys, only to respond with a 4-iron over the water to a peninsula green on the par-3 15th to 15 feet for birdie.

The 17th hole changed everything.

“I thought about just trying to hit it in the front bunker, which I probably should have done – probably would have made 4 if I’d have done that,” Johnson said. “But it is what it is. I came back and birdied the last hole, tied for the lead going into tomorrow. I like my position.”

And he doesn’t need a degree in math to figure out the easiest scenario – just win.