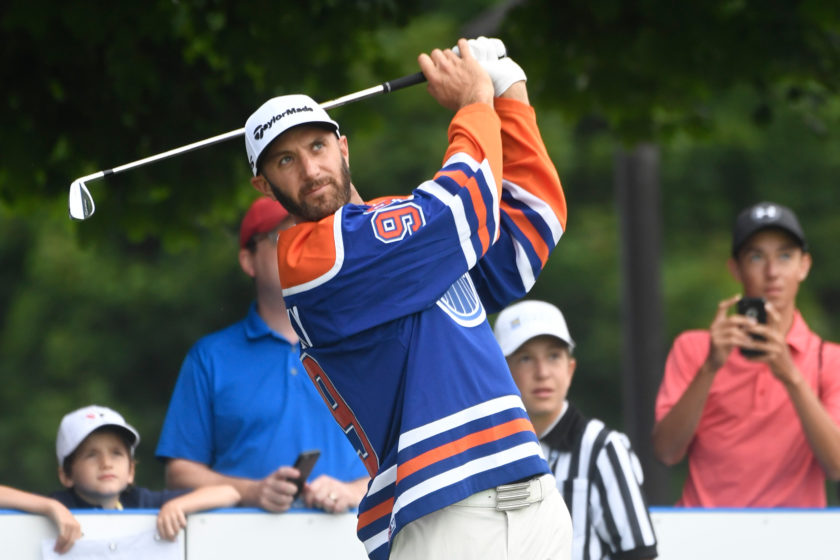 OAKVILLE, Ont. – Dustin Johnson pulled on the Edmonton Oilers jersey with “Gretzky 99” on the back, lined up his shot and hit it over the water and on to the green at No. 7 on Glen Abbey Golf Club.

American through-and-through, the RBC Canadian Open is Johnson’s home tournament by marriage, with future father-in-law Wayne Gretzky growing up in nearby Brantford, Ont.

But playing in a pro-am tournament on Wednesday morning, Johnson was encouraged to embrace his extended family’s sport of choice at Glen Abbey’s seventh hole, which has a tee box surrounded by hockey boards and tournament volunteers stationed at the hole wearing referee’s stripes.

“I’m sure Wayne had something to do with it,” said Johnson with a laugh. “They wanted us to wear our favourite hockey jersey when we hit the shot on No. 7 so I had the Gretzky jersey on.”

As world No. 1, Johnson always draws a big crowd. But the added boost of having family ties to hockey royalty makes him extra popular at the RBC Canadian Open.

“I get a lot of fans up here, thanks to Wayne. Thanks Wayne, I appreciate that,” said Johnson, who is engaged to Gretzky’s daughter Paulina. “I get a lot of fans and it’s great. It’s always fun to play for a big crowd, to have them cheering you on.”

Johnson will tee off with Watson and Canadian Adam Hadwin to start the first round on Thursday. Hadwin, ranked No. 55, is the top Canadian on the PGA TOUR this season. Although he’s from Abbotsford, B.C., he also sees the RBC Canadian Open as his hometown event, even if it’s more than 4,000 kilometres from home.

“It’s always exciting to come back in to Canada and play,” said Hadwin. “They love golf up here. They love supporting Canadians. I’m really just proud to represent them.”

Hadwin is one of 21 Canadians in the field at this year’s tournament, which also includes PGA regulars Nick Taylor of Abbotsford, Mackenzie Hughes of Dundas, Ont., Corey Conners of Listowel, Ont., and Ben Silverman of Thornhill, Ont.

Mike Weir of Brights Grove, Ont., the 2003 Masters champion, and David Hearn, from Gretzky’s home town of Brantford, are other Canadians to watch.

Pat Fletcher of Victoria was the last Canadian to win the national championship in 1954, finishing at 8-under with a four-stroke lead at Vancouver’s Point Grey Golf Club.

“We all want to do well, we all want to play well,” said Hadwin. “I know it’s been a long time (since a Canadian won).”

The RBC Canadian Open’s undergoing major changes after this season. With Glen Abbey possibly slated for demolition, it could be the last time the Jack Nicklaus-designed course will be used for the event. Hamilton Golf and Country Club will play host next year.

“I like playing the week before (a major),” said Koepka. “I think it’s good prep to know where your game is at. I wouldn’t be surprised if the (Hamilton) golf course, they grow the rough up just to kind of imitate, I guess, Pebble Beach a little bit.”