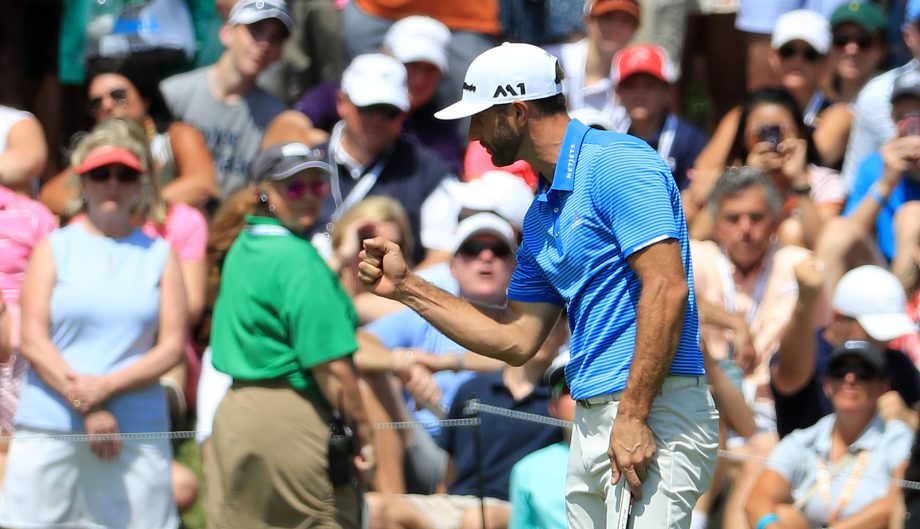 AUSTIN, Texas – Dustin Johnson finally held up his end of the bargain Sunday morning, setting up a powerful title bout in the Dell Technologies Match Play against Jon Rahm.

Johnson was forced beyond the 16th hole for the first time all week in an error-filled finish against Hideto Tanihara of Japan, and the world’s No. 1 played didn’t escape until he holed an 8-foot par putt on the 18th to preserve a 1-up victory.

Johnson headed to the championship match Sunday afternoon with a chance to become the first player to sweep the four World Golf Championships.

In his way was Rahm, the rising star from Spain who faced a tough semifinal of his own against Bill Haas before pulling away with three birdies over his last four holes for a 3-and-2 victory. Rahm has yet to play the 18th hole at Austin Country Club in competition.

Even as Johnson was locked in an unexpected battle with Tanihara, the 22-year-old Spanish rookie said he was hopeful to see Johnson in the final for what he referred to as a rematch from Mexico. Johnson won the Mexico Championship three weeks ago, but not before Rahm made a bold charge in the final round until two bogeys at the end.

A victory for Rahm would make him the youngest player to win a World Golf Championship and put him in the top 10 in the world.

Johnson hasn’t trailed in a match all week, and he has led after 89 of the 94 holes he has played.

But he finally looked beatable against Tanihara.

Johnson was 2 up at the turn when he three-putted the 10th for the second straight round. He looked as if he would lose the par-5 12th when he couldn’t reach the green from a fairway bunker and Tanihara had 18 feet for eagle. In a shocking swing, Tanihara ran it 6 feet by and three-putted for par, and Johnson pitched to 8 feet and won the hole with a birdie.

But it wasn’t a swing in momentum.

Tanihara hit two great shots, a flip wedge to a dangerous pin over the water on the 13th to 4 feet, and a long iron into the wind on the 14th to 6 feet, to win both holes and square the match. From there, Johnson appeared to be playing not to lose.

With Tanihara in trouble on the 15th, Johnson came up well short of the green with a wedge and missed a 5-foot par putt to win the hole. On the par-5 16th, Johnson missed an 8-foot birdie putt to win the hole. He finally regained the lead with a pitching wedge to 6 feet for birdie on the 17th. Even so, he made it tough on himself by leaving yet another wedge short on the 18th and having to save par for the victory.

Rahm had only trailed on one hole this week – the first he played – until Haas rolled in a 40-foot birdie putt on the third hole. Rahm used his power to make birdie on the fifth and sixth to take the lead, only for Haas to answer with a birdie on the seventh to square the match.

Haas had three straight birdie putts from the 15- to 20-foot range starting at No. 9 and couldn’t convert.

Rahm hit a bolder tee shot on the 13th that left him a short wedge that he hit to 10 feet for birdie and a 1-up lead. Haas squandered a great chance to halve the match when Rahm missed the 14th green long, hit a flop shot about 20 feet by and made bogey. From a swale short of the green, Haas chipped weakly to 15 feet and missed the putt to stay 1 down. Rahm took it from there.