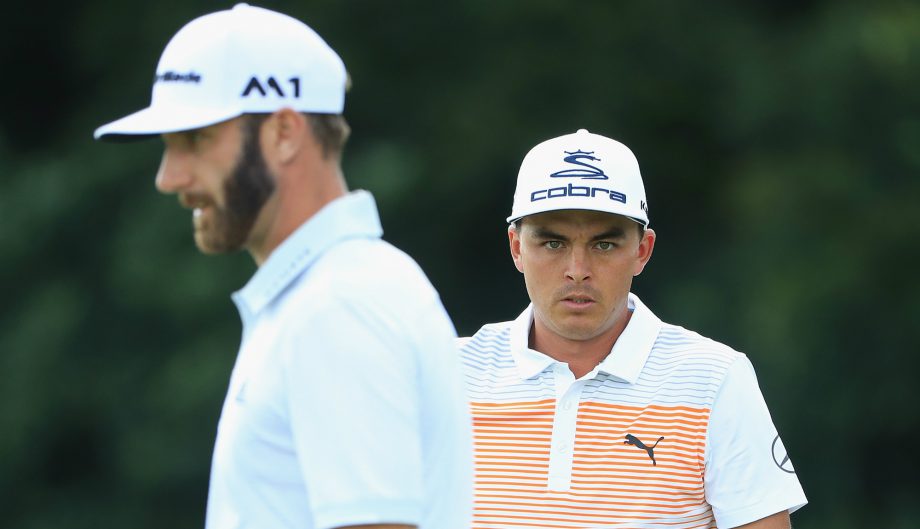 Two swings cost Dustin Johnson the lead. It wasn’t long before Jordan Spieth and Rickie Fowler caught up to him in The Northern Trust, setting up a weekend of star power in the opening FedEx Cup playoff event.

Johnson, finally looking like the No. 1 player who looked unstoppable in the spring, appeared on the verge of building a big lead at Glen Oaks Club until consecutive tee shots wound up on the wrong holes and forced him to scramble just to escape with bogey.

Fowler made up a five-shot deficit in six holes playing alongside Johnson, making a 15-foot birdie on the last hole for a 66 to join Johnson and Jhonattan Vegas (65) atop the leaderboard. And then Spieth put together a stretch Friday afternoon reminiscent of his British Open victory, minus a shot from the driving range, in a 65.

Spieth began the back nine with five straight birdies, matching his longest birdie streak on the PGA Tour. It ended with a bogey on the par-3 15th when his tee shot rolled back into the water, but then he answered with a 40-foot birdie putt up the slope on the 16th.

.@JordanSpieth knew he needed to make a move today.

Even without his best year with his best club, Spieth has won three times and captured the third leg of the Grand Slam. But his putter doesn’t leave him for long.

“Putter has been streaky for me this summer, which is better than just kind of not-so-great, which it was before that,” he said. “So I’ve been able to mentally use one or two good putts to make me feel like I’m putting awesome.

“I got on the good side of the streak on the back nine today.”

Spieth made pars from the bunkers on the last two holes to join the others at 6-under 134.

He wasn’t alone in running off a string of birdies. Matt Kuchar looked as though he might miss the cut until his caddie encourage him to try to get back to even par. Kuchar ran off four straight birdies and kept right on rolling, ending his round of 64 with eight birdies on the last 10 holes.

Kuchar and two-time Masters champion Bubba Watson (68) were one shot out of the lead.

Mackenzie Hughes of Dundas, Ont., was the lone Canadian to make the cut and is five strokes back after a 69. Adam Hadwin (72) and Nick Taylor (76), both of Abbotsford, B.C., missed the cut while Graham DeLaet of Weyburn, Sask., withdrew with a back injury.

Watson is at No. 113 in the FedEx Cup, and only the top 100 after The Northern Trust advance to the next playoff event at the TPC Boston. Watson says he won’t play the rest of the year once he is eliminating. A big finish this week could delay that another month, a nice problem to have.

Jon Rahm, who played with Johnson and Fowler, had a 68 and was two shots behind along with Justin Rose (68) and Russell Henley (72).

With a second-round 66, @RickieFowler joins the leaders at -6.

Seventy players made the cut at 2 over par. That included Geoff Ogilvy, who went bunker-to-bunker-to-bunker on his final hole and had to make a 4-foot putt for double bogey. If he had missed, then it would have let 11 players back into the tournament. Among those missing the cut were Hideki Matsuyama, the No. 1 seed going into the playoffs, who three-putted the last hole and missed by one.

Johnson looked so sharp early on that he didn’t have a birdie putt longer than 12 feet over his first six holes, though he converted just two of them. He reached 8 under when he hammered a driver and a fairway metal to the back of the green on the 629-yard third hole, two-putting for birdie.

This miss puts Matsuyama in jeopardy of missing the weekend. pic.twitter.com/3HAzEuyWRL

But his tee shot on No. 4 was inches away from the third fairway, and his next shot struck a tree. He had to get up-and-down from 50 feet right to save bogey. The next tee shot was so far left it was in the rough on the fourth hole. He clipped branches, hit a poor chip and had to two-putt from 80 feet for his bogey.

“But other than that, I felt like it was a really solid day,” Johnson said. “I’m really pleased with the way the golf game is right now and I’m looking forward to this weekend.”

Fowler, meanwhile stuffed it on No. 4 and rolled in an 8-footer on the par-3 sixth over water, and just like that they were tied.

“Pretty stress-free,” Fowler said. “I’ve been driving it well this week, which is key around here. You don’t want to play out of the rough.”

Phil Mickelson limited his mistakes and made four birdies in a round of 68, which left him six shots behind but gave him two more rounds at Glen Oaks to post the kind of scores that would make him a viable pick for the Presidents Cup. Rory McIlroy chipped in for birdie on the tough par-3 second and shot 68. He was seven shots behind.

The focus was at the top with so many popular players contending _ Spieth, Fowler, Johnson at the top.

“That’s what tends to happen in the playoffs,” Spieth said. “As less guys make the next tournaments, you start to get players that are playing very well, and to no surprise, those guys are toward the top. … Should be an exciting weekend.”