Johnson wins in Mexico in debut as No. 1 player in the world 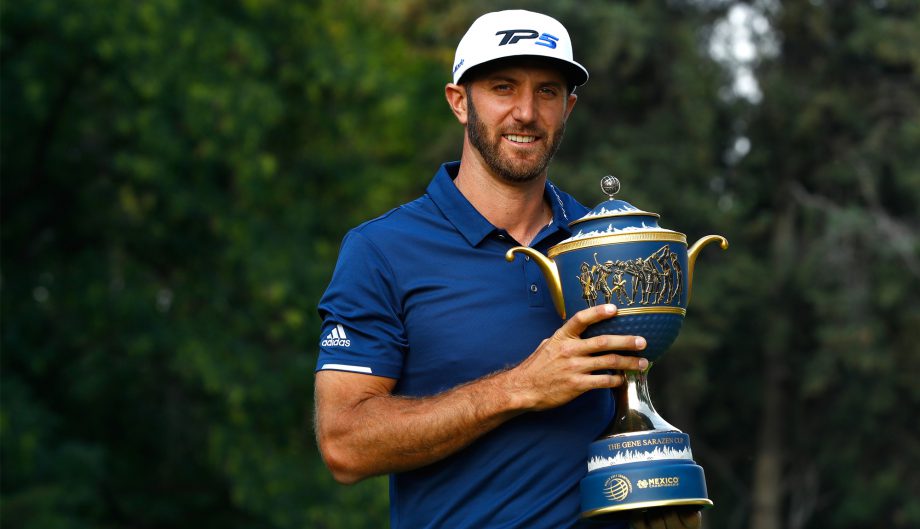 MEXICO CITY – The only elevation that mattered at the Mexico Championship is how much higher Dustin Johnson can go.

In his first start since a five-shot victory at Riviera that made him No. 1 in the world, Johnson captured his fourth World Golf Championships title Sunday by blowing by some of golf’s biggest names and then delivering his best shot at the end to secure a one-shot victory over Tommy Fleetwood of England.

He won for the fifth time in his last 15 starts on the PGA Tour, including a major and two World Golf Championships.

He closed with a 3-under 68, and finished this one off with one of the most difficult shots in golf. Clinging to a one-shot lead, his feet on the edge of the bunker and ball below his feet, Johnson hit a three-quarter shot from 127 yards with his 54-degree wedge to the middle of the 18th green for a two-putt par.

“Probably the best shot I hit all week, especially under the circumstances, was that second shot on 18,” he said. “A fantastic shot.”

It wrapped up a spectacular week in Mexico City, which hosted this World Golf Championship after it had been at Trump Doral the last seven years. Johnson walked through the roped corridors with his arms extended to slap hands and bump fists with an energetic crowd, especially kids who called out, “Dee-Jay!”

Justin Thomas had a one-shot lead over Johnson, with Rory McIlroy and Phil Mickelson another shot behind. It was an All-Star cast that Johnson turned into a one-man show with a 31 on the front nine to build a four-shot lead.

“Around here, anything can happen,” Johnson said.

Thomas fell back with a double bogey in the water on the par-3 seventh. Neither McIlroy nor Mickelson got anything going. The challenge came from Jon Rahm, the dynamic rookie from Spain, who made an eagle and two birdies in a five-hole stretch on the back nine. That’s right when Johnson had his only real struggles, three-putting from 25 feet for bogey on No. 12 and taking bogey from a bunker on No. 13.

And then he was one shot behind, but only as long as it took him to get up-and-down from a bunker on the par-5 15th for birdie to tie for the lead. Johnson was flawless with pars. Rahm, who had gone 59 holes without a three-putt, took two straight for bogeys that took him out of the game.

“Sometimes you’re going to make some bogeys from those greens and unfortunately for me, it happened at the end,” Rahm said.

Johnson became the fifth player to win in his first tournament as No. 1 in the world. His fourth World Golf Championship title is second on the career list behind Tiger Woods, who won 18 times since the series began in 1999.

It was quite the consolation prize for the 26-year-old Fleetwood.

His 40-foot birdie putt on the final hole for a 66 put him alone in second and secured a spot in the Masters for the first time. He moves to No. 35 in the world and is certain to stay in the top 50 over the next three weeks before the cutoff to get an invitation to Augusta National.

Rahm’s two late bogeys gave him a 68 and a tie for third with Ross Fisher, who closed with three straight birdies for a 65. That assures Fisher a place in the next WGC event in three week at the Dell Match Play.

The great theatre among the stars in Mexico City never really materialized.

Thomas bounced back from a 38 on the front nine and was still in range until closing with three pars for a 72 to tie for fifth with Thomas Pieters. McIlroy and Mickelson each shot 71 and tied for seventh. McIlroy had a two-shot lead going into the weekend and shot 70-71.

“These two rounds were the sort of rounds I would have expected the first two days, not the last two,” said McIlroy, playing for the first time in seven weeks while recovering from a rib injury.

Johnson was steady right to the end to capture his 14th career victory on the PGA Tour, and his second straight.

The greens of Chapultepec gave him fits all week. Johnson missed eight putts from inside 5 feet. In the opening round, he missed six putts from the 6-foot range or closer. His power and his clean striking allowed him to overcome that.

The most recent player to win in his debut at No. 1 was Adam Scott at the Colonial in 2014.

“It’s a tough spot to be in,” Johnson said. “There’s a lot of pressure on you. I came out and played really well.”

Johnson now takes the next two weeks off before playing the Dell Match Play and the Shell Houston Open ahead of the Masters, where Las Vegas already has installed him as the favourite.