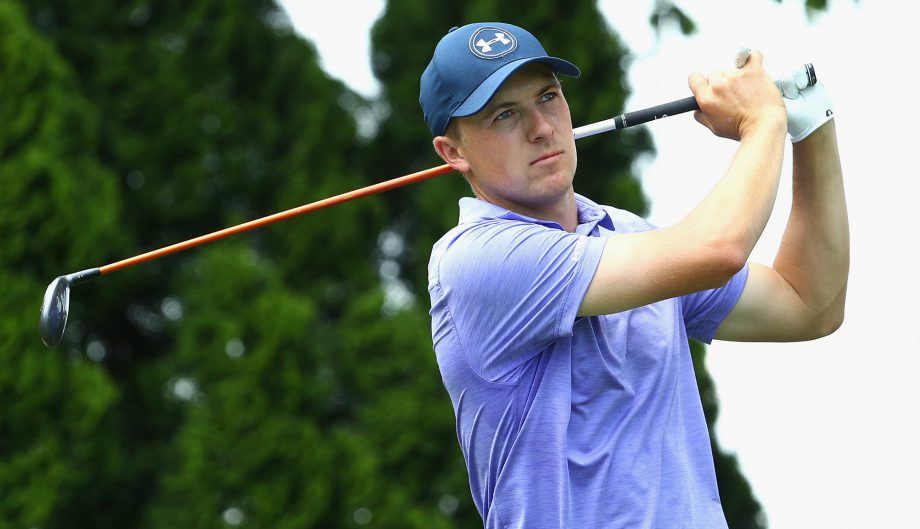 Spieth shot a 1-under 69 on Friday morning, then watched as a windy afternoon kept anyone from overtaking him.

The conditions also kept fourth-ranked Jason Day from making the cut for a second straight week. He bogeyed the 18th for a 70 to finish at 2 over. No. 3 McIlroy shot a 73, also closing with a bogey, but managed to just sneak into the weekend at even par.

Spieth, who began the day one shot ahead after a first-round 63, started on the back nine. The 23-year-old Texan had to recover from a double bogey on the par-5 13th hole after hitting his tee shot left and out-of-bounds. He also had four birdies and a bogey to reach 8 under.

“We’ve been kind of far behind in a lot of the events in making comeback runs,” said Spieth, the two-time major champion who tied for 35th last week in the U.S. Open. “But being able to be toward the front of the pack on a Saturday afternoon is a beautiful position to be in and one that we’ll certainly embrace. I’m going to try to have a lot of fun this weekend.”

“A golf course like this, even when the wind is blowing, if you’re hitting your tee shots straight, you’re going to have some wedges into the greens,” Reed said.

A 1-under 69 has @JordanSpieth still atop the leaderboard after his second round at @TravelersChamp. pic.twitter.com/uboe9gA3Va

U.S. Open champion Brooks Koepka isn’t in Connecticut this week, but former Florida State teammate Chase Seiffert is in contention. The 25-year-old had to qualify Monday to get into the tournament. He made two eagles Friday and finished with a 66 to reach 6 under.

“I came into the week with no status on any tour, but I knew my game was really good,” Seiffert said. “I just had to get it done. To come out and play the first two rounds the way I did, it gives me a lot of confidence.

Graham DeLaet (Weyburn, Sask.) led briefly during the afternoon, but had a double bogey on 18 for a 70 to drop into the group at 5 under.

Eighty-five players made the cut and 68 finished within seven shots of the lead.

The biggest drama of the afternoon was watching the world’s third- and fourth-ranked players try to make it to the weekend.

Day was close, until he hit his second shot at 18 into a greenside bunker. He failed to get up and down, missing a 6-footer for par.

McIlroy seemed to be in good shape on 18. He was on the right edge of the fairway and looking at a second shot 105 yards from the hole. But he slipped during the swing and the ball went just 63 yards and farther right.

“My right foot completely came out from under me,” he said. “Obviously, there was a tiny bit of drizzle. Maybe a little bit of surface water. Just, I don’t know. It was weird. As soon as I started down, I just felt it and I couldn’t stop.”

McIlroy may have saved his tournament on the 13th. After hitting his first shot in the water and taking a drop, he hit his third shot to 17 feet and made par. He then putted in from off the green on 14. McIlroy, who didn’t qualify for the weekend at Erin Hills, hasn’t missed consecutive cuts since 2012.

Anirban Lahiri of India, playing his first tournament since tying for second at the Memorial, shot a bogey-free 63 to move to 4 under. He made a 32-foot eagle putt on No. 13.

“I was out (since the Memorial) meditating,” he said. “So I’ve been a little bit rusty. The body is kind of easing its way back in. So I think I’m going to get better as the week progresses.”

Two-time Travelers champion Bubba Watson, who missed the cut at Erin Hills, will have another weekend off. He followed up a 75 in the first round with a 67 and finished at 2 over.

Weather could also affect the scoring Saturday. A forecast of rain led tournament officials to move the start of the third round back to 11 a.m., with the players going out in threesomes off the first and 10th tees.