Josh Whalen: On the right track 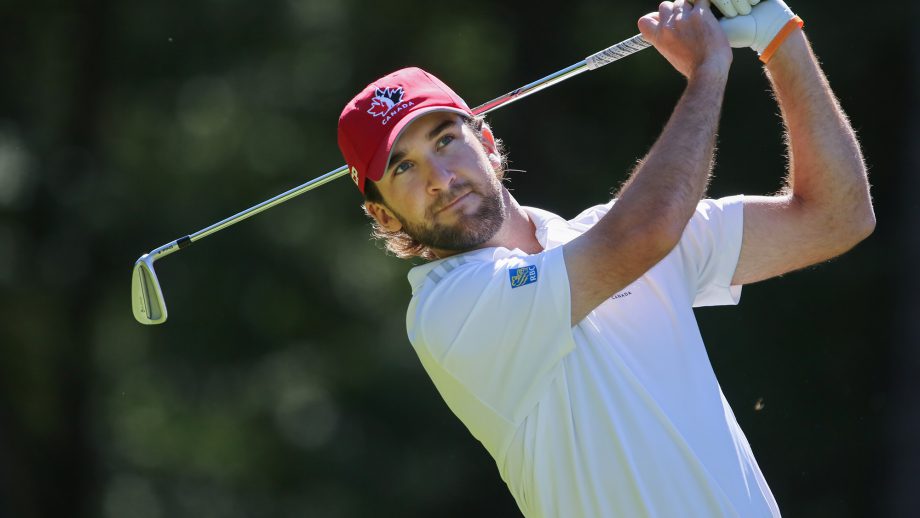 Josh Whalen understands that finding success on the golf course is not a sprint but rather it’s a marathon. And so he’s taken the time necessary to fine tune his game since graduating from Kent State University in 2017.

As one of the top amateur golfers in Canada, Whalen is close to taking that next step on his journey – one that he hopes will see him follow in the success of fellow Kent State and Team Canada alums Corey Conners and Mackenzie Hughes.

Whalen’s journey on the golf course began in Napanee, Ont., when he was introduced to the sport at the age of four by his grandfather, Burt Whalen.

“My grandparents would babysit my sister and myself. My sister would stay with my grandma and I would go to the golf course with my grandpa,” recalled Whalen.

“When I started school, my grandpa would pick me up after school and we would go play. Eventually, when I was seven or eight I got a membership of my own and started to play quite a bit more.”

Whalen says his grandfather and his father, Terry, were avid golfers and encouraged him to pursue the sport further.

“I started playing at local one day golf tournaments to get my feet wet and then played some CJGA tournaments in Ontario.  I didn’t do too well at the beginning but eventually I started getting some good results.  Eventually, I would move on to play in some Golf Ontario events and then some Golf Canada events,” he recalled.

Josh Whalen [Duncan, B.C.] August 6, 2018, Canadian Men’s Amateur Championship at Duncan Meadows & Pheasant Glen Photo by: Golf Canada“When I was able to compete and win against some of the top golfers in Canada, it made me realize I could do something more with golf – and by that, I mean play Division 1 golf down in the U.S.”

Whalen would score a scholarship to Kent State University in Ohio where he was mentored by Hall of Fame Coach Herb Page.

“It’s a great program. In my first year I got to play with Taylor Pendrith and Corey Conners which was a great experience. I look up to those two guys a lot,” he pointed out.

During his four years at Kent State, Whalen enjoyed a number of highlights including a second place finish at the Ontario Men’s Amateur in 2015; and was selected first team All-Mid-American-Conference in his sophomore year.

“I can’t say enough about Kent State, it was an amazing atmosphere. It’s also motivating to know that Mackenzie Hughes and Ben Curtis are both also graduates of the program,” Whalen continued.

“All the coaches there really helped me develop as a player and as a person.”

Even though he was Canada’s top-ranked amateur player after he graduated from Kent State in 2017, Whalen felt his game still needed some work.

Ultimately, the Kent State grad believed there was more to learn and was willing to put in the time before turning pro.

“I just felt it was important to work on certain areas of my game before taking that next step,” said the second-year member of the National Amateur Squad.

“I’ve really benefited from being part of the National Team Program. We get a lot of support both on and off the golf course. And working with Derek (Ingram) has helped me in terms of understanding the game a little better,” he said.

Whalen says the next step in his journey will take place later this autumn.

“I’ll probably play in the Web.com Q-School in the fall; and if that’s not successful then I will look to play the Mackenzie Tour for next year and work my way onto the Web.com Tour,” said Whalen.

“The ultimate goal is to play on the PGA Tour. I know it’ll be a bit of a climb and it’ll take a bit of time but I’m prepared for it.”

According to Derek Ingram – head coach of the men’s National Team Program – Whalen has made significant improvements since joining in 2018.

“Josh’s chipping and pitching has improved the most; and his putting as well,” he pointed out.

Ingram speaks highly of the current state of Whalen’s game.

“Josh’s game is actually quite similar to Corey Conners. He drives the ball really well. It’s a  combination of long and straight and he’s got great iron play. He hits a ton of greens in regulation.  He’s very consistent,” said Ingram.

“Josh has seen Corey, Mac and other guys have success in amateur golf, college golf and on the PGA TOUR – and so they’ve really paved the way for him in terms of providing an example of ‘this is how you do it.'”

In terms of the big picture goal of becoming a successful PGA pro, Ingram believes Whalen is on the right track.

“Josh just needs to be able to compete and do well in bigger tournaments to get that confidence in his game. And he needs to stay the course and continue what he’s been doing,” Ingram noted.

“He’s a smart player and knows it’s going to take time, it’s a long process – but he’s got a great work ethic and a great attitude and so I really like his chances of following in Mac and Corey’s footsteps someday.”