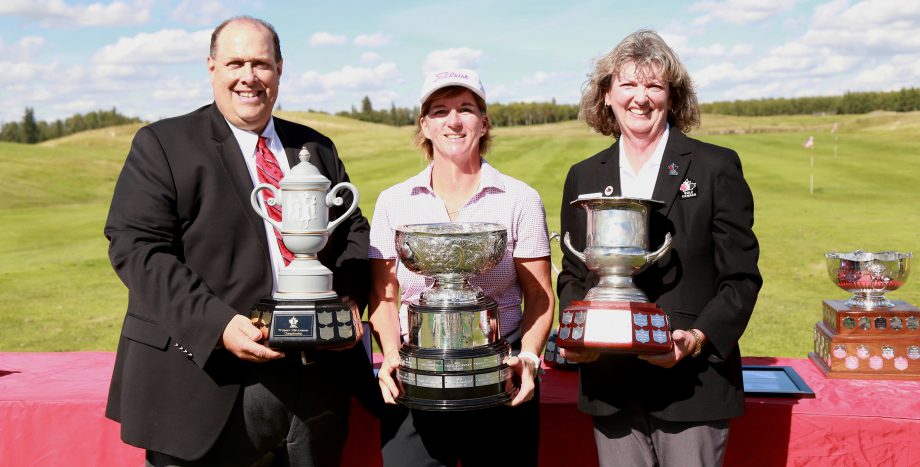 PONOKA, Alta. – Beaming sunshine and a mild breeze provided a picturesque backdrop for the final round of the 2016 Canadian Women’s Mid-Amateur and Senior Championship. Judith Kyrinis carded a 4-under 68 to claim a trio of titles at Wolf Creek Golf Resort.

“It’s something I’ve always dreamed of for a very long time, so I’m pretty proud,” said the 52-year-old.

The native of Thornhill, Ont., opened the day with the 36-hole lead in the 25-and-over Mid-Amateur, 40-and-over Mid-Master and 50-and-over Senior divisions. A 5-under 31 performance across a bogey-free front nine that included three birdies and an eagle on the par-5 6th hole secured her a five-stroke victory. Steady play down the stretch held off the advances of 2014 Senior champion Hélène Chartrand.

“I just tried to stay in the process that I’ve been working on all year,” reflected Kyrinis. “Playing the golf course has been a big part and my key is the fairways and the greens…and par is always your friend. I rolled in a lot of really nice putts today – that can never hurt.”

In 2015, Kyrinis finished runner-up in the three divisions to Etobicoke, Ont., native Terril Samuel. Two years ago, she claimed third in the Senior division. After holding the lead following two days of competition, she was determined to close-out the victory and learn from her near-misses.

Her attention now shifts to building upon today’s experience in hopes of finding future success. When asked about her takeaways from the victory, she flatly responded, “that you can get the job done when you’re under pressure.”

“To shoot a final-round 68 is pretty cool – you feel really good. It’s great for that memory bank and going forward, I just hope I keep drawing on that again…coming up, I’ve got the U.S. Mid-Am and U.S. Senior.”

With the victory, Kyrinis has earned entry into the 2016 U.S. Senior Women’s Amateur Championship to be played at Wellesley Country Club in Wellesley, Mass., from September 17-22.

Hélène Chartrand from Pincourt, Que., finished the day with three birdies in an even-par round to claim runner-up honours in all three divisions. Port Alberni, B.C., native Christina Proteau was 7-over 223 in her attempt to capture a sixth Canadian Women’s Mid-Amateur title. Terrill Samuel earned third in the Mid-Master and Senior divisions.

Kyrinis’ trio of national titles adds to a victory in the inter-provincial team championship which was played concurrently over the competition’s first 36 holes. Alongside teammates Ivy Steinberg from Stouffville and Canadian Golf Hall of Fame member Mary Ann Hayward of St. Thomas, Team Ontario claimed a three-stroke victory over Team Quebec.

The 2017 Canadian Women’s Mid-Amateur and Senior Championship will be contested at Humber Valley Resort in Little Rapids, N.L., from August 22 to 24.

Additional information from the competition is available here.