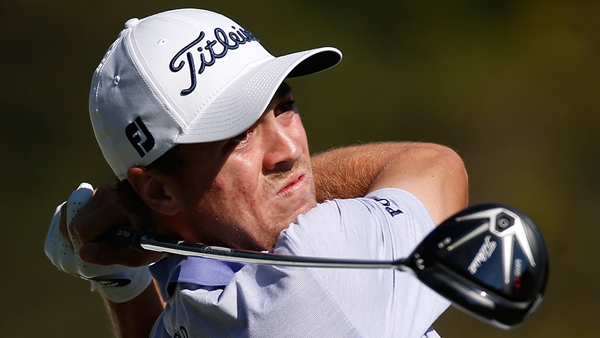 COLUMBUS, Ohio – Justin Thomas won the Nationwide Children’s Hospital Championship on Sunday for his first Web.com Tour title, beating Richard Sterne with a birdie on the first hole of a playoff.

Thomas hit a wedge from 75 yards to 2 1/2 feet to set up his winning birdie on the par-4 18th. Sterne blew a late three-stroke lead, then missed a birdie putt in the playoff after leaving his approach 20 feet short.

“I just tried to stay patient today and you have to do that here,” Thomas said. “I don’t want to say it’s a relief to win, but it’s hard to win with the level of play out here. … It means you’re the best that week and you beat everybody you played against. It’s a really cool feeling and it’s tough because it doesn’t happen very often, especially in professional golf.”

Playing the four-event Web.com Tour Finals for PGA Tour priority after wrapping up a tour card with a top-25 finish on the Web.com regular-season money list, Thomas earned $180,000 to jump from fifth to third with $470,470 with one event left.

The 21-year-old former Alabama player shot a 1-under 70 to match Sterne at 6-under 278 on Ohio State’s Scarlet Course.

“It’s crazy,” Thomas said. “I feel like of all the chances I had, it’s crazy how this one kind of worked out, but sometimes that’s how it happens. I believe everything happens for a reason and it just happened to be my week.”

Thomas, from Louisville, Kentucky, also earned a spot next year in the Memorial Tournament at nearby Muirfield Village. He was the 2012 college player of the year as a freshman and led the Crimson Tide to the 2013 NCAA title.

Sterne, from South Africa, bogeyed Nos. 15-17 and parred the 18th for a 70. Sidelined for four months after hip surgery in March, the six-time European Tour winner and 2013 Presidents Cup player was playing for the 10th straight week. He three-putted the par-4 15th to start the slide.

“I struggled all day to roll the 30-, 40-footers up close and I came up short couple times. I thought, `This time, just give it a little bit more.’ And it rolled on 5, 6 feet past,” Sterne said. “That was the first short putt I missed all day.”

The top 25 players on the Web.com regular-season money list are competing against each other for PGA Tour priority, with regular-season earnings counting in their totals and the final leader getting a spot in The Players Championship.

Mexico’s Carlos Ortiz, already fully exempt on the PGA Tour as a three-time Web.com winner this season, leads the list with $515,403. Canada’s Adam Hadwin, the Chiquita Classic winner last week, is second with $499,667.

The other players – Nos. 26-75 from the Web.com money list and Nos. 126-200 in the FedEx Cup standings – are fighting for another 25 cards based on their earnings in the four tournaments. If a player from the top 25 on the Web.com regular-season list leads the series but doesn’t top the Web.com list, he will cross over to the Finals list and get a full exemption.

The Web.com Tour Championship is next week in Ponte Vedra Beach, Florida.