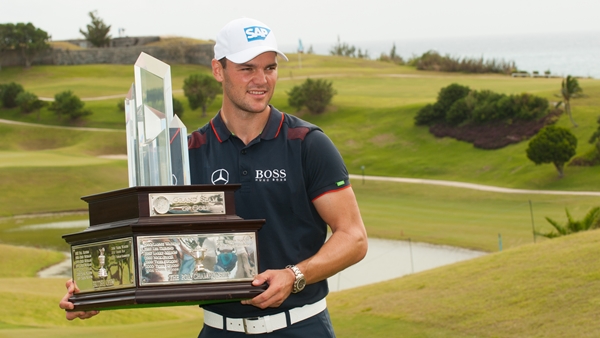 SOUTHAMPTON, Bermuda – Martin Kaymer is making a habit of beating Bubba Watson in head-to-head situations, even at an exhibition of major champions in Bermuda.

Kaymer won the PGA Grand Slam of Golf on Wednesday by surviving a wild day of lead changes. The U.S. Open champion won on the first playoff hole at Port Royal by making a 10-foot birdie and then watching Watson miss his birdie putt from 4 feet.

“I was surprised that he missed it,” Kaymer said after closing with an even-par 71. “Obviously, you don’t want to win a golf tournament that way, but I’ll take it.”

British Open and PGA champion Rory McIlroy closed with a 75 and was eight shots behind. Jim Furyk, the alternate in this 36-hole event for the year’s four major champions, had a 73 and was another shot behind.

Kaymer chipped in for eagle on the 16th hole at Gleneagles to beat Watson in the Ryder Cup in another European victory. They also met in a playoff in the 2010 PGA Championship at Whistling Straits, which Kaymer won on the last hole when Watson hit into the water.

Another shot into the water cost Watson at Port Royal.

The stress didn’t end when the Grand Slam was over.

With Hurricane Gonzalo quickly approaching, the PGA of America chartered a flight to get its entire crew off the island. Officials were making sure the four players could get their flights out before the Category 4 storm arrived. It was expected to be near Bermuda early Friday, according to the U.S. National Hurricane Center in Miami.

That’s when it turned in Watson’s favor – but only for a minute. The Masters champion made birdie and took a two-shot lead when Kaymer made bogey. But on the par-5 17th, Watson hit into the water for a bogey, and Kaymer made birdie.

Both made par on the 18th in regulation, and then returned to No. 18 for a playoff.

“It felt like nobody really wanted to win around the turn,” Kaymer said.

Watson missed four good birdie chances on the front nine until he finally converted on No. 8. That was the start of 10 straight holes in which neither player tied a hole with a par. Over the last 12 holes, Kaymer and Watson combined for eight birdies and seven bogeys.

Watson saved his most costly mistake for the playoff hole.

“I hit great putts. They just didn’t want to go in this week,” Watson said. “That’s how golf is sometimes.”