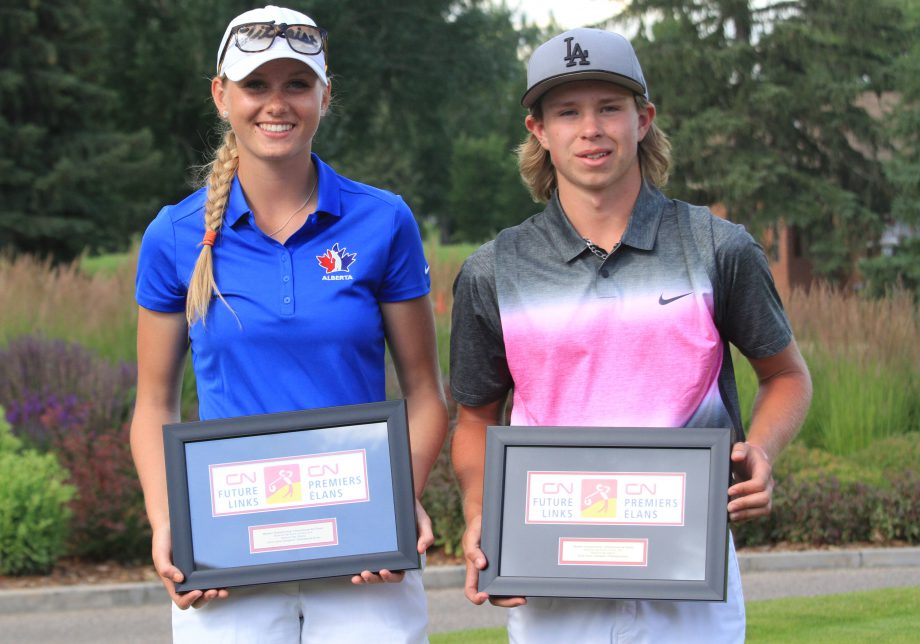 Koss hung on following three double-bogeys in regulation play to send the championship to a playoff on the par-4 10th hole against West Vancouver’s Phoebe Yue. The Calgary product recorded her third birdie of the day to claim the title.

“It was really stressful today. I wasn’t striking the ball as well and I was missing a lot of three-footers,“ said Koss. “I was just trying to breathe in the playoffs and calm myself down because I was really shaky going into that. I don’t think I actually watched her [Yue] hit any balls.”

The 17-year-old Koss finished with runner-up honours at this event in 2015 at Goose Hummock Golf Course in Gibbons, Alta. With a CN Future Links title in hand, she now looks ahead to this summer’s National Championship.

“I’ve worked so hard to get to this point. Last year I three-putted on the last hole to lose by one, and that was heartbreaking. Today, it was nice to see that this hard work I’ve been putting in for the past year has really paid off.”

Yue carded a 1-over 73 to rally from a five-stroke deficit, but fell to Koss with a par performance on the extra hole. Calgary’s Kenna Hughes, the 2015 champion, finished with a bogey-free 1-under showing across her final nine holes to take third-place at 7-over.

As the Junior Girls division’s Top-6, Koss, Yue and Hughes alongside Calgarians Annabelle Ackroyd, Claire Emery and Taylor Stone have earned exemptions into the 2016 Canadian Junior Girls Championship from August 2-5 at The Links at Penn Hills in Shubenacadie, N.S.

An eagle on No. 11 and four birdies through his final four holes propelled Calgary’s Brendan MacDougall up the Junior Boys leaderboard.  The 18-year-old recorded his lowest score of the week – a 4-under 68 – to force second-round leader Chandler McDowell into a playoff with matching scores of 7-under 209.

The pair remained knotted following the first playoff hole, before MacDougall secured the championship title by making par on No. 9.

“I’ve actually never been happier in my life! This is my last CN Future Links event, so I’m pretty excited about that,” said MacDougall. “I’m pretty happy with the way I came back. I made a lucky par on ten and from there, I said ‘alright, I’m not out of it and I can come back.’”

In his final year on the junior circuit, MacDougall hopes to improve upon his T23 result at last year’s Canadian Junior Boys Championship at Summerlea Golf & Country Club in Vaudreuil-Dorion, Que.

“I just told myself each round, ‘Brendan you’re good enough, you’re here, you know you can play well, if you play your game, you’re going to be fine.’ This will be my third time at nationals, so if I can improve the way I played last year, that would be great.”

McDowell of Springbrook, Alta., recorded five birdies on the day, including four across a bogey-free back nine. Team Canada Development Squad member Alexander Smith of Calgary collected four birdies to claim a share of third at 3-under alongside Thomas Code of Dorchester, Ont.

MacDougall, McDowell, Smith and Code will be accompanied by Kai Iguchi (Banff, Alta.) and Kade Johnson (Yorkton, Sask.) at the 2016 Canadian Junior Boys Championship which will be contested at Clovelly Golf Club in St. John’s, N.L. from August 1-4.

Additional information regarding the 2016 CN Future Links Western Championship can be found here.