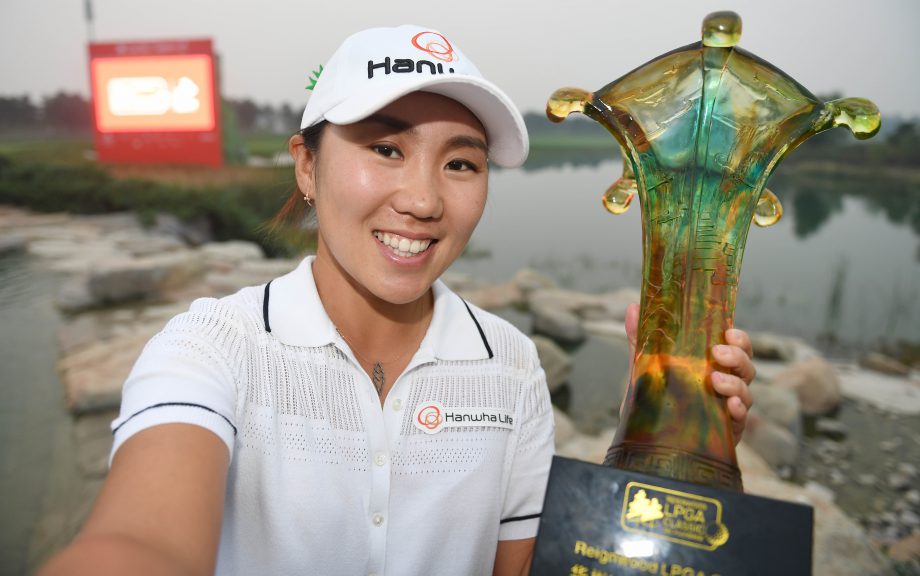 BEIJING – In-Kyung Kim won the Reignwood LPGA Classic on Sunday for her first LPGA Tour victory in six years, making an eagle and a birdie on the two late par 5s to lead a South Korean sweep of the top three places.

The 28-year-old Kim shot a 7-under 66 at Reignwood Pine Valley, holing a 25-foot eagle putt on the 16th and a 12-footer for birdie on the 18th for her fourth tour title and first since the 2010 Lorena Ochoa Invitational in Mexico. She also won a Ladies European Tour event last month in Germany.

China’s Shanshan Feng, the 2013 winner in the event that wasn’t played last year, shot a 69 to tie for fourth with Canada’s Brooke Henderson (71) at 21 under.

The 19-year-old Henderson, from Smith Falls, Ont., a two-time winner this year, plans to play all six weeks in Asia, a journey that will take her to Taiwan and South Korea the next two weeks, back to China for the Blue Bay LPGA at Hainan Island, and then to Malaysia and Japan.

Maude-Aimee Leblanc of Sherbrooke, Que., was even-par in the final round to finish tied for 42nd at 5-under. Hamilton’s Alena Sharp’s final round of 3-under left her 2-under for the tournament and tied for 51st.

“Fifteen was really big, too,” Kim noted when asked about the eagle on 16.

The 5-foot-3 player was aggressive on 16 after considering laying up.

“I wasn’t sure go for it or not go for it,” Kim said. “I felt like today I really played with everything I got. I didn’t really pull back. Even No. 9, I felt was the right club. I think I managed. I played aggressively, which I had to on this golf course. And especially back nine, I knew that everybody was going to score, so I wanted to do the same thing.”

Hur birdied five of the last six for a 70 in the round delayed 1 1/2 hours at the start because of rain and lightning. She opened bogey-bogey-birdie-bogey and parred the next eight.

Second-ranked Ariya Jutanugarn shot a 65 to tie for sixth at 18 under and take the lead from the idle Lydia Ko in the player of the year points race. The tour leader with five victories, Jutanugarn had a double bogey on the par-5 sixth, then birdied eight of the last 12 holes – with birdies on the final four par 5s. The Thai player also had a double bogey on a par 5 in a second-round 75 that took her out of contention.

Kim is the sixth South Korean winner this season and the third-oldest winner behind Anna Nordqvist (29) and Brittany Lang (30). Kim earned $310,000 to push her season total to $573,534 and is projected to jump from 42nd to 29th in the world ranking.