Kim leads Webb by a shot at Evian Championship 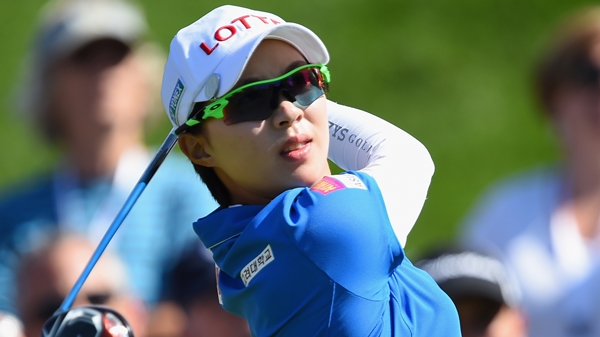 EVIAN-LES-BAINS, France – South Korean teenager Hyo-Joo Kim emerged from a third round riddled with errors by contenders to lead the Evian Championship by a stroke on Saturday and in sight of her first major.

Kim hit four bogeys on the front nine before recovering for a 1-over 72. That she regained the lead was a legacy of her remarkable 61 on Thursday, the lowest score in major history, and her rivals also dropping on the leaderboard.

Karrie Webb mixed four birdies with three bogeys in a 1-under 70, leaving the 39-year-old one shot behind Kim and with a great chance of an eighth career major.

“Really just hung in there. The conditions were challenging today with the breeze,” Webb said. “I did a really good job and finished the last four in 2 under. That really made my round.”

Mi-Jung Hur of South Korea was two behind Kim at 6 under overall.

Overnight leader Brittany Lincicome of the U.S. dropped four shots off the lead after a 6-over 77, which featured two double bogeys and a triple bogey within the first seven holes.

“Hopefully tomorrow I can shoot a couple under par and see if I can get it back around,” said Lincicome, the 2009 Kraft Nabisco champion.

Kim was aged 11 when Webb won her last major: The Kraft Nabisco in 2006, the year she won Evian before it was a major.

“Just happy to be in this position. It’s been a while,” Webb said. “Haven’t gotten too down on myself when things haven’t been going well, which has helped me.”

Kim is in the first year of a physical education course at Seoul University. Ranked 20th in the world, she leads the Korean LPGA money list with three wins.

Anna Nordqvist of Sweden, the 2009 LPGA Championship winner, is three behind Kim in a tie for fourth with Mariajo Uribe of Colombia.

Nordqvist double-bogeyed the perilous 17th. As the ball flew over the green on her second shot she muttered, “You’re kidding me.”

Hur has even more reason to rue a triple bogey on the 16th – her only, but costly, mistake.

Hur made the Evian field by tying for ninth at the Portland Classic two weeks ago and earning $23,262 to move up to 93rd on the money list. She has one U.S. LPGA Tour title, five years ago, and has not finished higher than 25th in a major.

Suzann Pettersen, the defending champion, started the day level with Webb, and four behind Lincicome.

But the Norwegian’s chances of a third major took a dive. She was exasperated after a double bogey on the 17th and finished with 74 to drift five shots behind Kim in a tie for 10th, alongside top-ranked Stacy Lewis of the U.S., and five-time major winner Inbee Park of South Korea.

Lewis’ day ended with two bogeys, while Park fought hard for a commendable 2-under 69.

If it was frustrating for Lewis, it was torturous for Lincicome, chasing her first title since 2011.

She opened with two bogeys and triple bogeyed on the seventh. Her ball landed in the bunker, her escape shot rolled back in; and she got out on her second attempt as the ball nearly crept back down.

“There is so much silly sand in these bunkers,” she said.

The 17th caused problems all day, and Lincicome over-hit from the fairway and the ball rolled downhill into the rough.

Uribe found herself in trouble on 18 as her approach landed in the water. Taking her shoes and socks off, she splashed the ball out of the pond for a bogey finish.