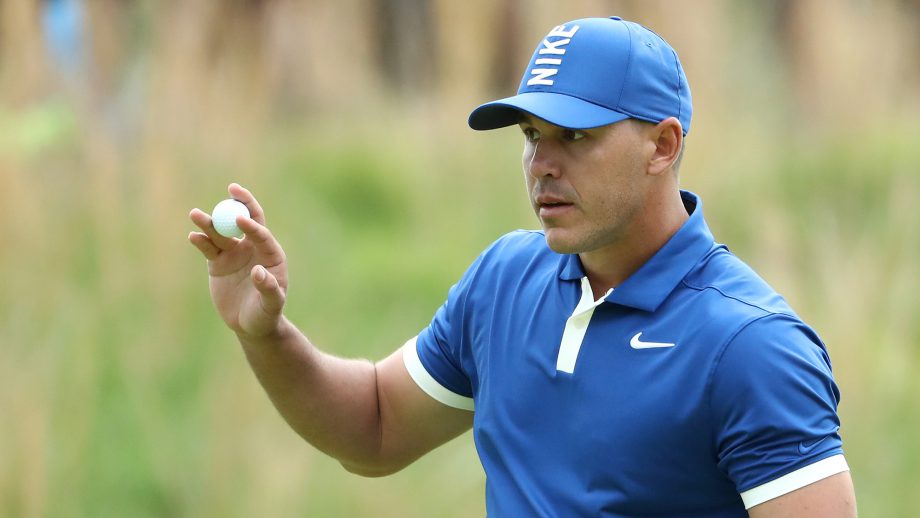 FARMINGDALE, N.Y. – The power. The putting. The poise. Brooks Koepka has it all at this PGA Championship, along with the lowest 36-hole score in major championship history and the largest lead by anyone at the halfway point of a Grand Slam event in 85 years.

It was daunting to so many players who watched Koepka pull away to a seven-shot lead Friday at Bethpage Black.

And it looked all too familiar to Tiger Woods, who won’t be around to see the ending.

Koepka backed up his record-tying 63 with a round that put him in a league of his own. He opened with three birdies in a four-hole stretch and made three birdies over the closing four holes for a 5-under 65 that broke by two shots the lowest 36-hole score – 128 – in any major.

Woods was along for the ride – a short one, in this case, because he missed the cut. He marveled at Koepka hitting 7-iron into a par 5, and a 9-iron into the uphill, 477-yard 15th hole.

“Relative to the field, I was about that long early in my career,” Woods said. “When you’re able to hit the ball much further than other players, and get on the right golf courses where setups like this is penalizing if you are a little bit crooked, and if he does miss it, he misses on the correct side, and he’s far enough down there to where he was able to get the ball on the green. And he did all the little things right.”

That describes Woods at Bethpage Black the first time this working man’s public course hosted a major at the 2002 U.S. Open. Woods went wire-to-wire when he was winning majors at an alarming rate.

Koepka, who has won three of the last seven majors, appears to be headed down a similar path.

Jordan Spieth had a 66 in the morning in a bid to keep in range. Adam Scott had a 64 in the afternoon. They were seven shots behind, victims of the largest 36-hole lead in a major since Henry Cotton led by nine in the 1934 British Open.

“It has to come to an end eventually, that good front-running,” Scott said with a smile. “Let’s hope it’s not 12 years like Tiger’s front-running lasted.”

Woods didn’t hit a fairway until the ninth hole, and then he started the back nine with three straight bogeys, turning his mission into making the cut. He wound up with a 73 and missed by one shot, only the ninth time in 76 majors as a pro he failed to advance to the weekend.

But he saw quite a show for two days.

“He’s driving it 330 yards in the middle of the fairway. He’s got 9-irons when most of us are hitting 5-irons, 4-irons, and he’s putting well,” Woods said. “That adds up to a pretty substantial lead, and if he keeps doing what he’s doing, there’s no reason why he can’t build on this lead.”

Just imagine what Koepka could do if he really brings it.

“This probably sounds bad,” Koepka said, “but today was a battle. I didn’t strike it that good. The way I hung in there today and battled it, I think that was probably more impressive than yesterday, not having your ‘A’ game but still being able to shoot a great score.”

Spieth was hopeful of being in contention at a major for the first time since the British Open last summer, and he made key putts for par and a 40-foot birdie putt toward the end of his 66 to get within two shots before Koepka teed off in the afternoon. It was close enough – at the time, anyway – for Spieth to get queried about the missing piece of a career Grand Slam at the PGA Championship.

“If I’m able to put some good work in tomorrow, I will be in contention on Sunday. And at that point, it will be just more of trying to win a golf tournament,” he said.

His goal was to stay in range, and Spieth felt he did enough.

He really poured it on at the end as Scott moved closer.

On two of the strongest holes in the finishing stretch, Koepka mashed a drive down the middle of the 15th fairway and hit 9-iron to 3 feet, one of only 10 birdies from 155 players in the field. He hit wedge into 5 feet on the 473-yard 16th hole for another birdie, and the record was in sight.

He finished with a wedge out of thick grass right of the 18th fairway, making a final birdie from just inside 12 feet. It was his 14th birdie of the week.

Scott, who pushed Koepka all the way to end at the PGA last year in St. Louis, ran in putts from 25 feet, 40 feet and 30 feet on the opening three holes – only to settle for par on the easiest hole at Bethpage Black at the par-5 fourth – and was 7 under with four holes to play, a chance to break the PGA record of 63 that Koepka had matched the day before.

That ended when Scott missed a 2-foot par putt on the 17th, and he had to get up-and-down from the fairway for par on the 18th.

And then he saw what Koepka was doing.

“I have to post two more good ones by the look of it at this stage,” Scott said.

Everyone needs help from Koepka, who didn’t seem the least bit interested in anything but another major title.

“I’d like to see that lead grow as large as it possibly can,” Koepka said. “I still have to go out there and do what I’m supposed to do, keep putting the ball in the right spot and make sure that you don’t make any double bogeys, and I should have a good chance of winning the championship.”