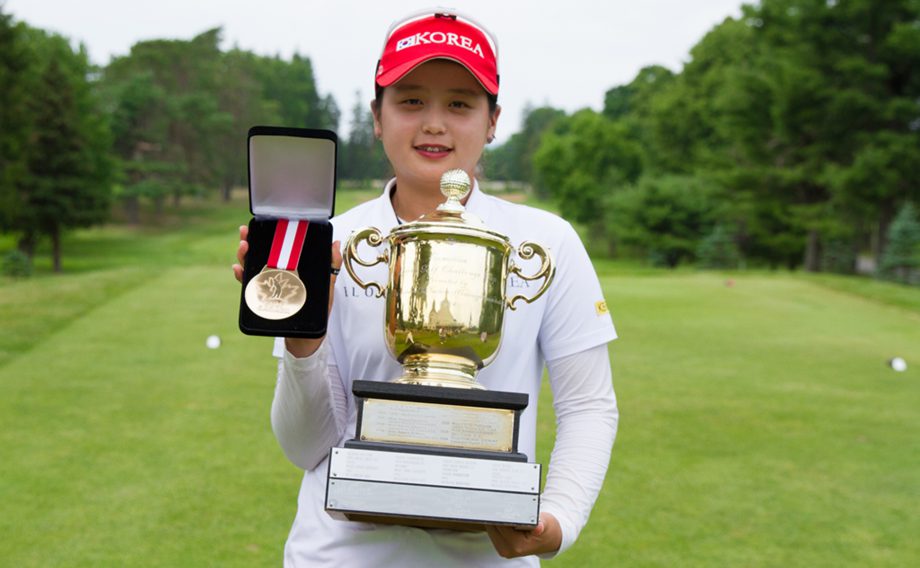 NEW MINAS, N.S. – Overcast skies hung heavy over Ken-Wo Golf Club as the final round of the 2016 Canadian Women’s Amateur Championship drew to a close. Hye-jin Choi of Paju-si, Korea shot a final round 66 to claim a four-stroke victory.

The reigning World Junior Girls champion recorded three birdies on the front nine, including two back-to-back on holes 8 and 9 for a 2-under 33. A bogey-free back nine complemented by two additional birdies on holes 11 and 13 brought Choi’s tournament total to 9-under 271. The 16-year-old is No. 14 on the World Amateur Golf Ranking and was recently crowned the low amateur at the 2016 U.S. Women’s Open at CordeValle in San Martin, Calif.

“I was happy with the beginning of my round, so I think that kind of led to me having a good finish today,” said Choi. “My putts weren’t great after the last three days. I held my grip higher up on my putter today which led to me making some pretty good putts.”

In addition to her 2016 Canadian Women’s Amateur title, Choi has earned exemptions into the 2016 U.S. Women’s Amateur Championship and two LPGA events: the Canadian Pacific Women’s Open at Priddis Greens Golf & Country Club in Calgary from August 22-28, and the Manulife LPGA Classic at Whistle Bear Golf Club in Cambridge, Ont., from September 1-4.

Choi is feeling confident in her game and looks forward to the challenges ahead against the world’s best. “I’m just going to play golf. I’m not going to worry about others and just play the way I can.”

Hannah Green (Perth, Australia) and Allisen Corpuz (Honolulu, Hawaii) stayed even on the day to claim their shares of second, while Andrea Lee of Hermosa Beach, Calif., matched Choi’s 4-under showing to join the pair at 5-under. Third round leader Maria Fassi (Pachuca, Mexico) carded a 72 to claim fifth at 4-under.

Team Canada National Amateur Squad member Naomi Ko notched four birdies in her final round en route to a 1-under 279 tournament total and a T7 result. As the low Canadian in the field, the 18-year-old from Victoria has earned an exemption into the 2016 Canadian Pacific Women’s Open.

Additional information regarding the 2016 Canadian Women’s Amateur Championship can be found here.