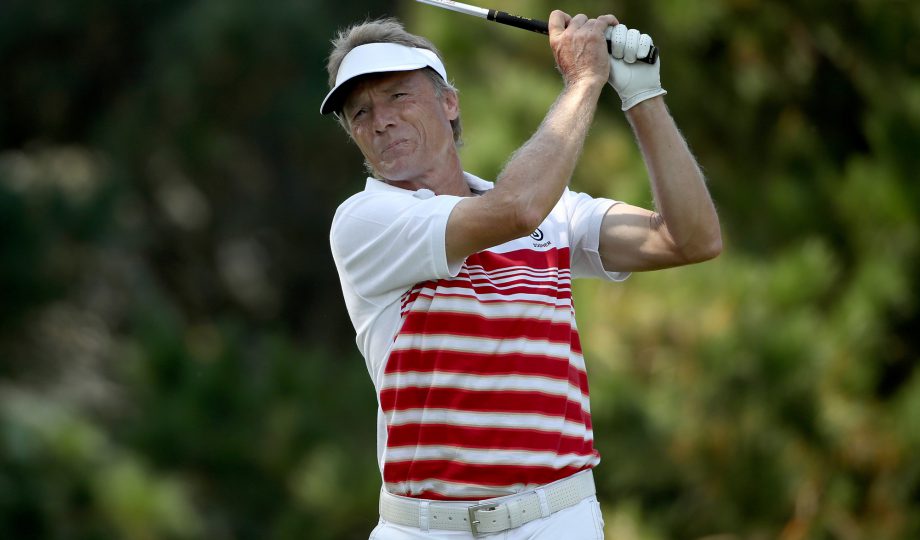 RICHMOND, Va. – Bernhard Langer shot a 5-under 67 on Friday in his return from a left knee injury, and Tom Byrum had a 65 to take the Dominion Charity Classic lead.

The 59-year-old German star leads the 50-and-over tour with four victories and has wrapped up the season money title with $2,697,459. He tops the Charles Schwab Cup Playoffs standings, 1,038,941 points ahead of second-place Colin Montgomerie.

“My putter was really good,” Byrum said. “I didn’t hit a putt that I didn’t feel good about other than the first hole. The first hole, I three putted. I made a bad stroke at the second putt. After that everything kind of settled down and everything got going and it was good. Drove it in the fairway, which you need to do. Hit my irons on the greens because you can hit the greens from the fairways, the rough is tough.”

He had a one-stroke lead over Miguel Angel Jimenez.

“Played well, played solid all day long and no mistakes,” Jimenez said. “One stroke behind the leader, two rounds to go. Nice.”

Jay Haas, Rocco Mediate and Scott McCarron matched Langer at 67. The 62-year-old Haas won a month ago in Newport Beach, California, to become the second-oldest winner in tour history.

Tom Pernice Jr., the winner last week at Sherwood, topped the group at 68.

Canada’s Rob Spittle was opened with a 70.

The playoff field was cut from 72 to 54 for the event, and Tom Lehman dropped out because of an elbow injury. The top 36 after the week will qualify for the season-ending Charles Schwab Cup Championship next week in Scottsdale, Arizona.

Each dollar earned in the first two events is worth two points – first place is worth $305,000 and 610,000 points this week – and is added to the regular-season total. At the Charles Schwab Championship, points will be reset so that the top five only have to win to capture the Charles Schwab Cup.