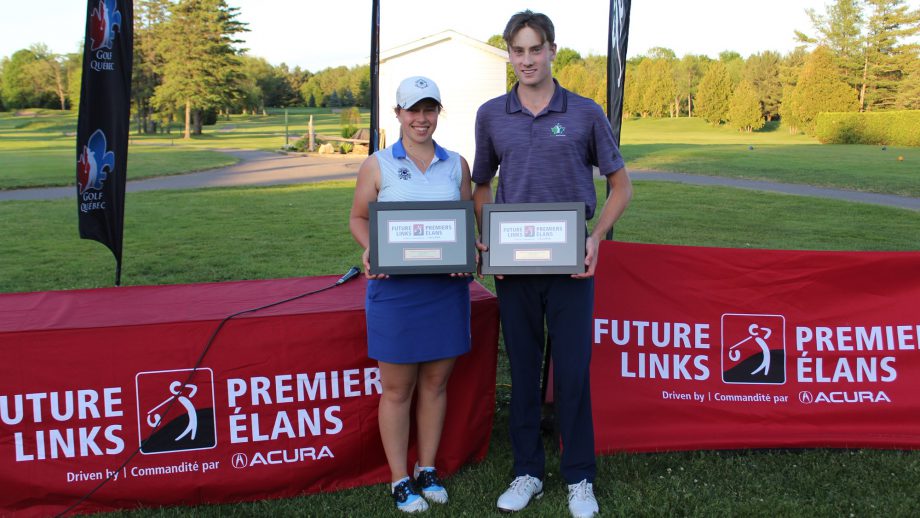 The battle for medallist honours in the boys division was fierce at Club de golf Lachute. The end of 54 holes saw three player sharing top spot — Robbie Latter, Remi Chartier and Frédéric Rousseau— with a playoff set to decide the victory.

Though the competition was stiff, Latter and Chartier outlasted Rousseau with 2 birdies at the second playoff hole. In the end, it was Latter who captured the fourth playoff hole with a birdie to win the Future Links, driven by Acura Quebec Championship.

The Mississauga, Ont., talent had started off the day tied for eighth with his younger brother. A share of the tournament-low 69 (alongside fourth-place Olivier Ménard) helped catapult him to share a piece of the lead before ultimately earning medallist honours.

“This is my first big win,” said the seventeen-year-old Team Ontario Member. “I just put everything together and stayed really calm throughout the round, making sure it was more of a marathon.”

In the junior girls division, Emily Romancew held on to claim victory after three consecutive days atop the leaderboard.

The Pierrefonds, Que., native ran into some trouble with four bogeys. A birdie on the last hole, however, helped her secure a comfortable 3-stroke win at 3-over-par 219.

“I had such a great day with the girls. I’m so happy with this result” said Romancew. “There’s no doubt that I’d rather be on the golf course than at home prepping for final exams!”

Ottawa, Ont. product Haley Yerxa shot the low-score in the girls division at 1 over. Though she struggled with a couple of bogeys in the front-nine, Yerxa finished strong with a birdie on the last hole to finish the tournament at 6-over-par 222 in solo-second. Élizabeth Labbé finished in third place at 8-over-par 224.