Lewis in range of big prize at Tour Championship 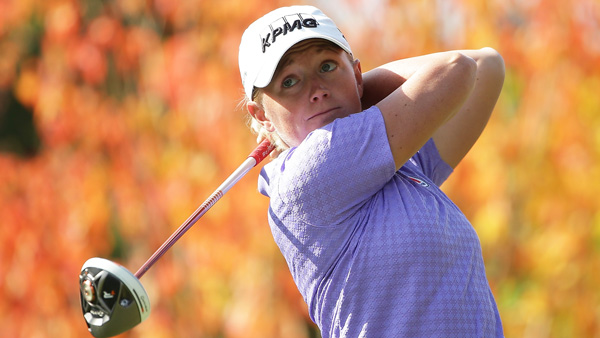 NAPLES, Fla. – Stacy Lewis was three shots out of the lead Thursday and one step closer to the largest payoff in women’s golf at the CME Group Tour Championship.

Lewis overcame the kind of tension she typically feels on the weekend at majors. She held it together with her short game, made a 25-foot eagle putt late in her opening round and wound up with a 3-under 69 to trail Julieta Granada by three shots.

“It’s going to be a long week if we’re feeling that on Thursday,” Lewis said.

There are two tournaments in one at the Ritz-Carlton Golf Resort.

Granada played bogey-free in a tough wind on the Tiburon Course for a 66 that gave her a two-shot lead over Sandra Gal in the LPGA Tour’s final tournament.

The other event is the Race to CME Globe, which pays a $1 million bonus to the winner. Only the top nine players in the standings can win it, and Granada isn’t one of them. She still hopes to close out the season with her first victory in eight years.

The top three players – Lewis, Inbee Park and 17-year-old Lydia Ko – need only to win the tournament for the $1 million bonus. Lewis is atop the standings, so finishing ahead of the other two is a good spot to be. Park and Ko each shot 71.

“I think everybody is thinking about the $1 million,” Park said.

It certainly showed at the start, especially when Lewis sent her opening tee shot well to the right. She recovered well and nearly holed a bunker shot for birdie.

Conditions were tough enough that only five players broke 70, and 19 of the 69 in the field broke par.

Lewis surged ahead with a hybrid from 217 yards that finished pin-high at the back of the green on the par-5 17th, and she lightly pumped her fist when it fell for eagle.

All week long, the chatter has been about everything at stake at the Tour Championship. Along with the $1 million bonus, Lewis or Park could take home all the significant awards on the LPGA Tour – player of the year, Vare Trophy for lowest scoring average and the money title.

Granada knows what it’s like to be an instant millionaire. She was a 20-year-old rookie in 2006 when she captured the ADT Championship, which at the time was turned into a winner-take-all extravaganza. That remains her only LPGA victory.

Granada is No. 24 in the standings, though there is plenty on the line at a tournament that still pays $500,000.

“I think all the girls that have a chance, they know what they’re doing out there,” Granada said. “They’re tough and they’re good players, so they will just keep playing their game. This course is a good finish, especially with 17 being a reachable par 5.”

Of the top nine in the standings who have a mathematical shot at the $1 million, only three failed to break par. Defending champion Shanshan Feng (No. 6) and Karrie Webb (No. 9) each had a 74, while Anna Nordqvist (No. 7) shot 77.

So Yeon Ryu (No. 5) had a 70. U.S. Women’s Open champion Michelle Wie, who is fourth in the standings, opened with two early birdies and was in good shape until a double bogey from a bunker on No. 16 and a bogey on the 17th, which felt like giving up two shots to the field. She was at 72.

Lewis thought she easily could have been 3 over through three holes, so toiling for pars at least calmed her down for a challenging day.

“Those first three or four holes, my swing was fine. I just wasn’t trusting what I was doing,” Lewis said. “You’re worried about making a mistake or a big number. That was the hardest part. … I don’t know if Lydia quite understands all that’s going on, but you could see it in Inbee and probably in me, too. We both played some tentative golf today, and hopefully, we can both free it up as we go throughout the week.”

Park made 15 pars in what she called a “boring round” with plenty of birdie chances and very few marked on her card. Just like Lewis, though, the five-time major champion didn’t shoot herself out of the tournament.

“Just happy that I still have a chance to win everything,” Park said. “I’m going to play very hard the next three days.”