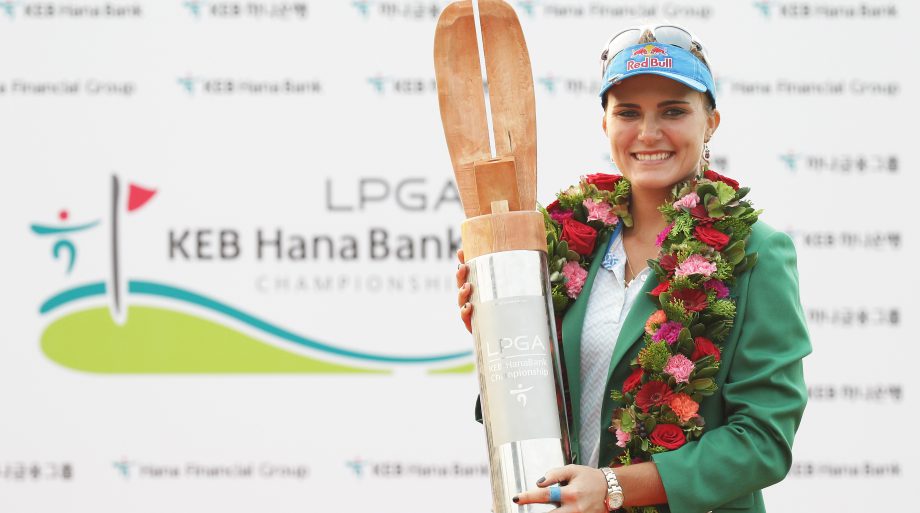 INCHEON, South Korea – Lexi Thompson broke out of a crowded pack Sunday to win the LPGA KEB Hana Bank Championship for her second victory of the year and sixth overall.

The 20-year-old American closed with a 3-under 69 to beat Taiwan’s Yani Tseng and South Korea’s Sung Hyun Park by a stroke on Sky 72’s Ocean Course.

“It’s very satisfying.” Thompson said. “I always look forward to coming back to South Korea and playing in front of these amazing fans. I love Sky 72. It’s a great golf course. Getting a win, it means so much.”

Lydia Ko missed a chance to take the top spot in the world from South Korean star Inbee Park, finishing with a 72 that dropped the 18-year-old South Korean-born New Zealander into a tie for fourth at 13 under with South Korea’s Amy Yang and American Gerina Piller.

Yang birdied the final nine holes for a 62. She became the first player in tour history to close with nine straight birdies, tied the record for consecutive birdies set by Beth Daniel in 1999, broke the nine-hole mark for relation to par at 9 under and matched the record for the lowest total at 27. Yang also tied the course record set by Sung Hyun Park on Thursday.

“I don’t know what just happened. Just can’t believe,” Yang said. “Shots were great. Early in the week I was shaky, but I don’t know, this back nine was crazy good.”

Thompson took a two-stroke lead with a birdie on the short par-4 15th. She drove to the right of the green and hit a flop shot to 8 feet.

“When I went for that green and I saw my ball bounce over, I’m like, ‘Probably not going to be the best chip shot, or the easiest,” Thompson said. “But I love hitting flop shots out of the rough. I just opened the blade wide open and just took a big swing at it. I figured, at worst, it would run through the fringe but have a straight uphill putt.”

“I’m overall a very aggressive player,” Thompson said. “So, if I have 190 front, I’m not laying up. But it’s good to play aggressive and know that I can get up-and-down.”

Thompson opened with rounds of 68, 67 and 69 to enter the final round a shot behind Ko and Sung Hyun Park. The 6-foot Florida player birdied the final three holes on the front nine to take the lead. She bogeyed the par-4 11th, and got the stroke back with the birdie on 15.

Thompson finished at 15-under 273, earned $300,000 and is projected to jump from fifth to fourth in the world ranking. She also won in July in Michigan.

Sung Hyun Park birdied the 18th for a 71 in her first start on the LPGA Tour.

Playing the group ahead of Thompson, Tseng birdied the final two holes for a 68. The former top-ranked player won the last of her 15 LPGA Tour titles in March 2012.

“Getting closer and closer,” Tseng said. “I’m very feeling good about my game.”

Ko ended up needing to win or finish in a two-way tie for second to regain the top spot in the world. Inbee Park shot a 69 to tie for 15th at 8 under in her home event.

“It was great to just see family, my niece and nephews out here,” Ko said. “It’s just really good to be able to play in front of them. Doesn’t matter if I shoot even par, under par, over par, you don’t get to play in front of family or relatives that often.”