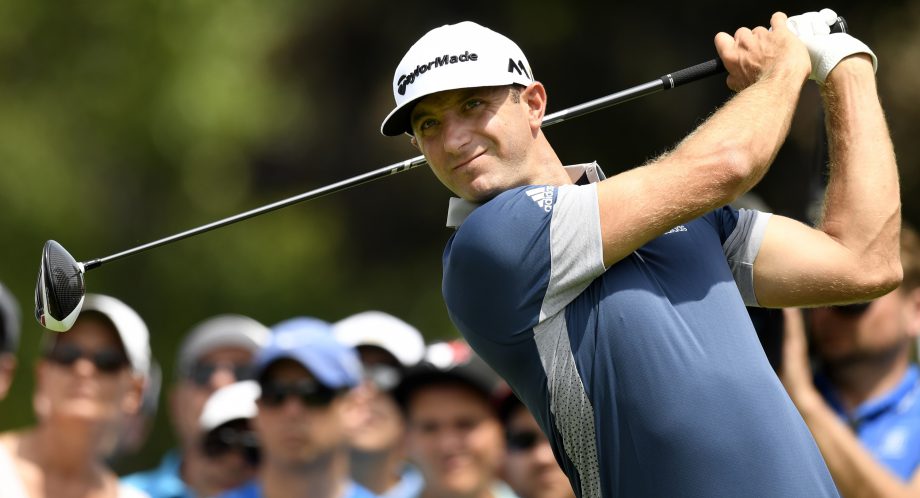 OAKVILLE, Ont. – Dustin Johnson and Luke List may be co-leaders, but it’s the weather that’s dominating play at the RBC Canadian Open.

Johnson made an eagle putt on the par-5 18th hole at Glen Abbey Golf Club to tie clubhouse leader List at 6-under 66 on Thursday. Johnson seemed well back after a double bogey on 14, but then recovered with a birdie on 16 to set up the climactic shot.

Most players struggled with the fast greens and fairways, making it tricky to play off the browned rough and not roll through the harder grass as a drought continues to dry out southern Ontario. High winds had flags ripping wildly and played havoc with high shots, making it difficult to play an accurate long game.

“It’s firm and fast,” said world No. 2 Johnson moments after stepping off the course. “It’s definitely tough to get the ball close to the hole. You’ve really got to land the ball on your numbers.

“With it being as windy as it was today, it was tough to do that.”

List had a birdie on No. 10, his first hole of the round, then followed it up with a birdie on Nos. 13, 15, 16 and 18 to take an early lead. He stayed steady through the front nine to finish ahead on a hot, sunny day. He pointed to his early start time _ 7:20 am _ as helping with his quick start.

“I was very fortunate that the first five holes there wasn’t much wind at all and then it kind of picked up,” said List, who was allowed him to miss the worst of the unforgiving weather.

Strong winds especially affected play on the back nine of Glen Abbey, which are mainly in a valley. High shots would get grabbed by the wind when the ball lofted above the valley’s walls, creating strange shots.

The seventh hole also frustrated several players, with a water hazard and several bunkers surrounding the green, forcing golfers to loft the ball above a tree line and then get victimized by the wind.

“If you miss the fairway, you’re pretty much done, there’s no chance of keeping it on the green,” said world No. 1 Jason Day, the reigning Canadian Open champion. “My mentality is just trying to get it up there as far as I can. As long I can just keep driving it straight, try to get up there somewhere around the green, if I miss it then I’ve got a wedge in my hand and hopefully I can hit it high and get it stuck on the green.”

Amateur Jared du Toit of Kimberley, B.C., eagled the par-4 17th hole at Glen Abbey Golf Club, then birdied 18 to enter the clubhouse in a tie for third at 5-under 67. Americans Chesson Hadley and Kelly Kraft were also at 5-under. Day was 3-under 69.

Du Toit compared playing at Glen Abbey on Thursday to playing in the desert.

“Going to Arizona State, I’ve played in a lot of dry conditions, so I think the conditions today were kind of in my favour,” said the 21-year old NCAA player, who added that “some of the drives are just running out outrageously.”

Amateur Garret Rank (69) of Elmira, Ont., who is a professional hockey referee, was the second lowest Canadian behind du Toit. Rank made an eagle putt from the rough edge of the green on 18 to finish at 3 under.

Adam Hadwin of Abbotsford, B.C., shot a 72 to finish the first round at par, while David Hearn of Brantford, Ont., was 2-over 74. Adam Cornelson of Langley, B.C., Corey Conners of Listowel, Ont., and Nick Taylor of Abbotsford are tied at 3 over.

Olympian Graham DeLaet of Weyburn, Sask., amateur Blair Hamilton of Burlington, Ont., and Ottawa’s Brad Fritsch all tied at 5-over 77, and Mike Weir of Brights Grove, Ont., and Branson Ferrier of Barrie, Ont., were grouped together at 6-over 78. Amateur Hugo Bernard of Mont-Saint-Hilaire, Que., was 9-over 81 and Montreal’s Dave Levesque was 13-over 85.

Today was the first time @Jareddutoit has had to sign autographs after a round. He’s T2 & sits as the top Canadian.https://t.co/WxdbjRCDJM