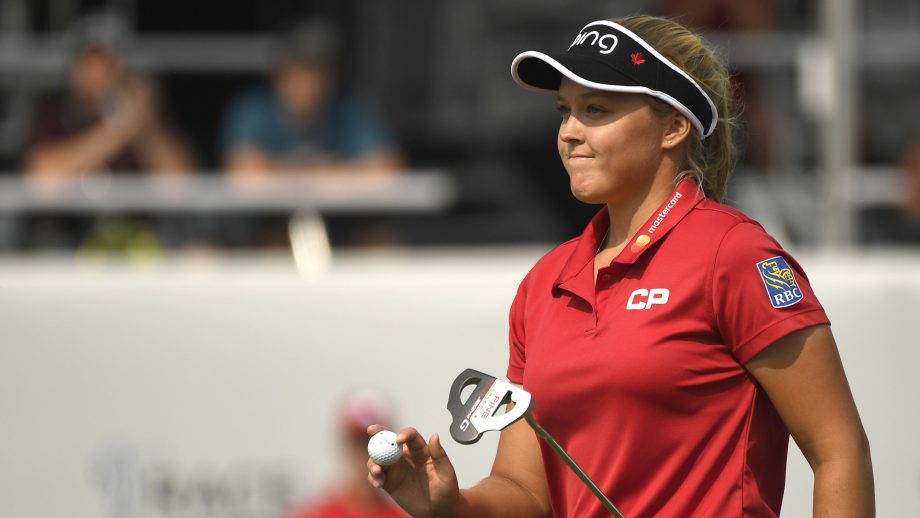 Annika Sorenstam has learned a thing or two about what it takes to be the best.

So when the World Golf Hall of Fame member says Canada’s Brooke Henderson is well on her way to becoming one of the top players on the LPGA Tour, it makes sense to pay attention.

Henderson’s emotional win at the CP Women’s Open last month in Regina could be just the beginning, the 72-time winner on the LPGA Tour said in an interview ahead of the final major of the season – the Evian Championship, starting Thursday in Evian-les-Bains, France.

“What Brooke did was an amazing display of golf,” Sorenstam said of Henderson’s triumph, which ended a 45-year drought for Canadians at their national championship.

“If this continues, she will soon be one of the best in the world.”

Sorenstam, who in 2014 was named the best Swedish female athlete in history, won three times in Sweden during her career.

She’s also a two-time winner of the Evian Championship, where Henderson will try to put an exclamation mark on a memorable year.

Sorenstam said she likes Henderson’s game, which mixes an aggressive approach off the tee with a nice short game.

The combination, she said, is going to be beneficial for the native of Smiths Falls, Ont., for years to come.

“She has gotten off to a quick start in her young career,” Sorenstam said of Henderson, who turned 21 on Monday. “I am sure there will be many more wins to follow.”

“It’s a beautiful golf course – usually challenging with the weather – but I think it suits my game well, particularly with how I’m striking the ball right now,” said Henderson.

“Hopefully all the pieces come together for the week and I can play well again.”

With more than US$1.2 million earned this season, Henderson sits second on the LPGA Tour money list with seven tournaments left. She’s also third on the year

that points list after the CME Group Tour Championship, the final event of the year, she’ll win a $1-million bonus prize.

Henderson’s CP Women’s Open victory was her second of the year. She also captured the Lotte Championship in Hawaii in April.

“I think it’s finally starting to sink in that I won our national championship, and it’s just such an amazing feeling and a dream come true to know that my name will always be on that trophy,” said Henderson.

With her win in Regina, Henderson figures to be a strong candidate for the Lou Marsh Trophy, given to Canada’s athlete of the year.

“It’s something that would be an incredible achievement and honour to be in the conversation for,” said Henderson. “Hopefully my game and my achievements on the course can put me in that position some day.”

Henderson now has seven victories since turning professional. The most by a Canadian – male or female – is eight, a record held jointly by George Knudson, Post, and Weir, all of whom accomplished the feat much later in their careers.

Henderson celebrated her birthday at home with her family and said the week off was “definitely needed” after her win and then playing in the Cambia Portland Classic the week after, where she tied for 21st.

“It was nice having a tournament to just roll straight into to try and act as normal as possible, but to just be able to relax for a few days and reflect on everything has been great,” she said.