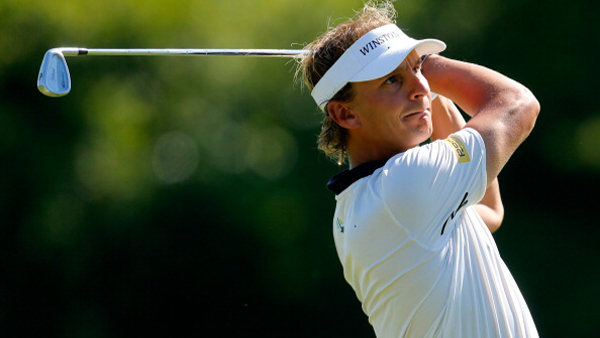 ATZENBRUGG, Austria – Defending champion Joost Luiten aims to become the first Dutch golfer to retain a title on the European Tour after taking a two-stroke lead over home crowd favorite Bernd Wiesberger going into the final day of the Lyoness Open.

Luiten carded seven birdies and dropped one stroke on Saturday to shoot a 6-under 66 and go 11 under for the tournament. Wiesberger, who won the event in 2012, also had a round of 66.

“I am in the position where I want to be,” Luiten said. “I need to play well again and focus on my own game.”

Fabrizio Zanotti of Paraguay was four strokes behind Luiten in third, while England’s Adam Gee was another stroke back in fourth.

Overnight leader Mikael Lundberg shot a 4-over 76 and dropped six strokes off the lead. The Swede double-bogeyed the par-4 third and had five more bogeys.

Luiten went top of the leaderboard with five birdies on the front nine. He dropped a stroke on the par-3 14th but birdied two more holes on the back nine.

The Dutchman singled out a long putt on the 17th as his best shot of the day. The birdie helped him stay two clear of Wiesberger, who birdied the 18th to the delight of the cheering home crowd.

“I played really, really well on the first 12, 13 holes,” Luiten said. “I could have done even better but I had that bogey on the 14th. After that I didn’t play great but I kept myself in it. Just one bogey is pretty good on a course like this.”

Wiesberger, who is ranked 69th, will need to win the tournament to enter the top 60 and earn a starting place at next week’s U.S. Open. But the Austrian said he won’t think about a possible trip to Pinehurst, North Carolina, before his home tournament is over.

Wiesberger carded five birdies on the first 10 holes before dropping a stroke on the par-4 11th. He gained two more strokes on the back nine.

“I am very happy,” he said. “I’ve done pretty well and made a good move. I played decent on the back nine … unfortunately I couldn’t take advantage of the par-5s.”

Wiesberger played a final-round 65 two years ago and said he will likely need a similar score to give himself a chance of overtaking Luiten.

“The way I hit the ball today, I can shoot that again,” Wiesberger said.

David Horsey of England carded the lowest score of the day with a 7-under 65 to trail Luiten by six. Horsey gained a stroke on the first hole and then made five consecutive birdies from the fifth. He added two more on the back nine before dropping a stroke on the par-4 17th.