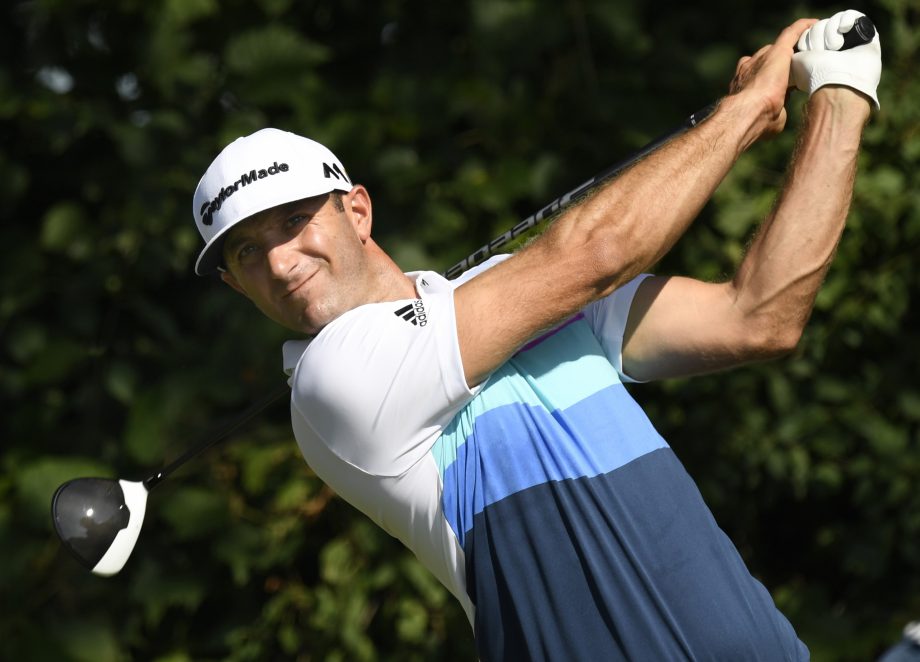 OAKVILLE, Ont. – Luke List’s biggest challenge might just be tuning out the hoopla that comes with playing alongside Dustin Johnson.

List made a nine-foot putt on the 18th hole to draw even with Johnson on Friday evening to remain co-leaders after two rounds at the Canadian Open. Both finished 1-under 71 to stay tied atop the leaderboard at 7 under.

That means the two will be paired for Saturday’s third round and the sophomore PGA Tour player will have to get used to the hundreds of fans that follow the superstar Johnson from hole to hole at Glen Abbey Golf Club.

“If I can just forget about what everybody else is doing and stay in my mind set,” said List on what it will take to stay on top of the leaderboard. “I’ve had a really good frame of mind the last couple days.

“Just my attitude right now, if I can keep that up, I’ll be happy with the way I finish.”

Johnson got off to a slow start in the morning group, including a double bogey on his third hole, before recovering with four birdies in his back nine to take a one-shot lead over List, his co-leader from Thursday’s first round.

“I really don’t know what happened the first four holes. Just got off to a bad start. Hit it in a couple awkward spots. Made some bad bogeys,” said Johnson as List began his afternoon round. “But I fought back and turned it around and felt like I played really nicely from 14 on in.”

List cruised through the front nine, opening with a birdie on the first hole then holding par all the way to the 11th, which he bogeyed. Back-to-back bogeys on 13 and 14 seemed to take List out of the running, but he recovered with birdies on 16 and 18.

“Two more days of this golf course, it’s a challenge out there,” said List of the fairways and greens that have been baked dry, making them firm and fast. “Those valley holes, 11 through 13, 14, really play tough.”

“Looking forward to taking aim at those tomorrow.”

Although they’ve had identical results in the first and second rounds of the Canadian Open, Johnson and List’s experiences at Glen Abbey have been very different.

Johnson, as No. 2 in the world rankings, has fans cheering him every step of the way, following him around the course despite the heat advisory affecting all of southern Ontario. Even as he spoke with media fans shouted “Let’s go D.J!” at Johnson.

On the other hand, List is 309th in the world and spent the first and second rounds playing relatively undisturbed.

“(Johnson’s) one of the hottest players in the game, so playing with him or around him is always good right now,” said List.

Amateur Jared du Toit (71) of Kimberley, B.C., was briefly tied for first, but a triple bogey sank him into an eventual tie for third at 6 under, joining Spain’s Jon Rahm and American Kelly Kraft.

Adam Hadwin of Abbotsford, B.C., was much sharper on Friday, improving on his first-round par performance with a 2-under 70 to tie for 21st.

Amateur Garrett Rank (75) of Elmira, Ont., was tied for 36th at par, while Corey Conners of Listowel, Ont., just made the cut at 2-over par.

Conners was 3-over 75 on Thursday and thought he’d played his way out of the third round Friday after he double bogeyed on No. 9, his final hole of the day. He finished with a 1-under 71 on Friday, putting him at 2-over par on the tournament, which, at the time, was a shot over the cutline.

“It’s obviously disappointing but it’s another golf tournament, and I’m able to kind of get over it a little bit easier now than I used to be probably,” said DeLaet, who will represent Canada in men’s golf at the Rio Olympics along with Hearn. “Obviously I wanted to play well here this week, but there’s more tournaments to play.”