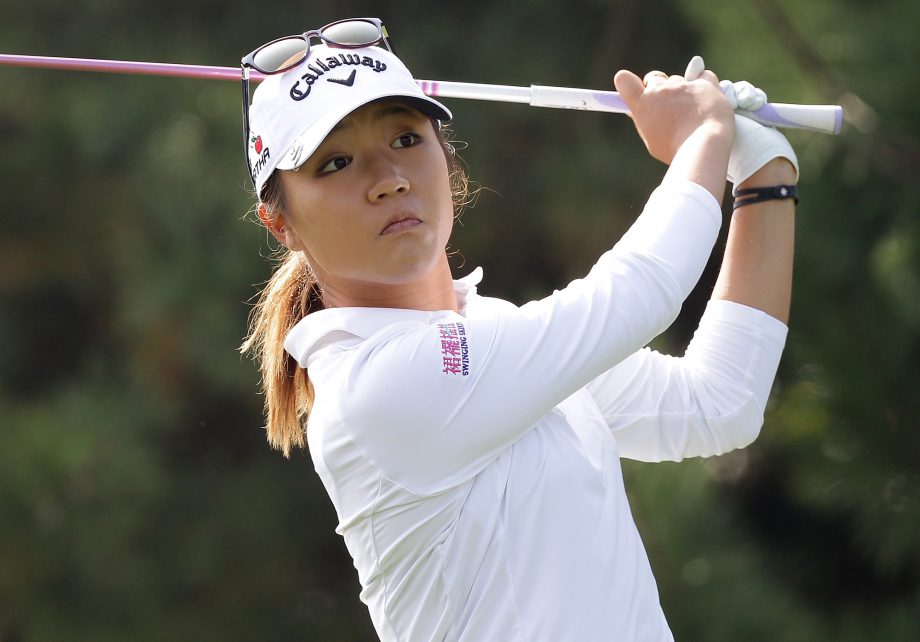 The second-ranked Ko made an 18-foot birdie putt on the final hole for a 7-under 65 and a one-stroke lead over Lexi Thompson. Park followed her course-record 62 with a 74 to drop two shots behind.

“I thought I played really solidly and made a lot of good putts,” Ko said. “When I was in trouble, I got a little fortunate, got a good lie in the rough.”

The South Korean-born New Zealander moved into position to regain the No. 1 spot in the world from South Korean star Inbee Park, one of her playing partners Friday. Ko would take the top spot with a victory and also could move up under other scenarios depending on where Inbee Park finishes. Inbee Park replaced Ko atop the list in June with the first of her two major victories this year.

“The closer we get or if there is a switch, the media is going to talk about it,” Ko said. “I’m sorry, but I’m going to try and ignore you guys. I think that’s the best way. Because when I’m out there, I’m just trying to hit a good shot and put myself in good position. If I thought about the rankings, the awards, it’s just way too much. It’s hard enough just trying to hit the ball straight out there.”

Ko had a 10-under 134 total on Sky 72’s Ocean Course. She tied for second last week in the LPGA Malaysia after winning her previous two starts in Canada and France, where she became the youngest major champion.

Inbee Park was tied for 25th at 3 under after a 72. She’s tied with Ko for the tour victory lead with four.

Thompson birdied three of the final four holes for a 67 on the course made more difficult by some tough pin positions.

“There were a few that were tucked on some ridges and that were just hard to get to,” the American said. “I think there’s going to be even harder ones tomorrow.”

Sung Hyun Park took a four-stroke lead into the round and was seven shots ahead of Ko.

“I think it would be a lie to say that I didn’t feel any pressure because of the record that I set yesterday,” Sung Hyun Park said.

Still four strokes in front after birdies on Nos. 4 and 5, she bogeyed the next three holes to drop into a tie for the lead with Ko. The 22-year-old South Korean player, making her first LPGA Tour start, missed a 3-foot putt on No. 6 for her first bogey of the week, had a 4-footer circle the cup and stay out on No. 7 and missed from 6 feet on No. 8. She birdied the 10th, but bogeyed the 12th and 18th.

“It was very difficult to read some of the putting lines,” she said. “I think I missed a couple of putts that I could have made. That’s kind of lingering on my mind at the moment.”

England’s Charley Hull, playing alongside Sung Hyun Park and U.S. Solheim Cup hero Gerina Piller in the final group, pulled within a stroke of the lead on the seventh hole, but dropped five strokes on the next six holes and finished with a 74 to drop into a tie for 19th at 4 under. Hull four-putted for a double bogey on No. 8, made a bogey on No. 10 and had another double bogey on the par-5 13th after hitting into the water.

American Jessica Korda, the Malaysia winner, was 1 under along with Michelle Wie and U.S. Solheim Cup captain Juli Inskter, the oldest player in the field at 55. They each shot 72.

“It’s great to play in front of big crowds,” Ko said. “I think they are as excited as us, even a little bit more. … Last year was the first time playing in Korea, and I’ve been noticing even more and more how much they love the LPGA and how much they love golf. I think the numbers are only going to go up. I think it’s going to be pretty crazy on the weekend.”