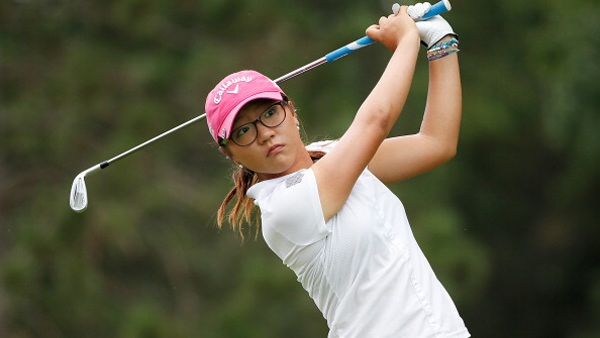 SYLVANIA, Ohio  — Now that she’s officially a millionaire, Lydia Ko joked she’ll have to keep a closer watch on where her paychecks go.

“I’ll probably see that going into my mom’s account,” she said with a laugh, referring to the $210,000 she got for winning Sunday’s Marathon Classic.

The 17-year-old broke free from a late tie with So Yeon Ryu, hitting a wedge to 4 feet for birdie on the 72nd hole to take the lead. Then she tried in vain – she’s just 5-foot-5 – to see past the large gallery at 18 as Ryu missed a 6-foot birdie putt on the final hole that would have forced a playoff.

“I couldn’t see it properly. I was behind some people,” she said after her second LPGA Tour victory that matched the two Canadian Open titles she won as an amateur. “But I kind of could tell what happened by the crowd’s reaction.”

She became the youngest player to top $1 million in career earnings on the LPGA Tour. Ko is roughly 17 months younger than Lexi Thompson, previously the youngest. Ko has shown incredible consistency in her rookie year on tour, making the cut in all 15 tournaments she’s entered. She has six top-10 finishes in addition to her wins, with five of those being top-fives.

Ryu had poured in a big-breaking, 25-foot birdie putt on the 17th to pull even.

But then Ko stuck her approach at the par-5 closing hole and calmly rolled in the birdie putt for a 6-under 65 that left her at 15-under 269.

Ryu hit a brilliant third shot to the green, but pushed her 6-footer at the 18th.

“Absolutely I’m disappointed I missed (that) birdie putt,” she said. “Sometimes if I get something lucky, then I get something that is unlucky. I just accept it and let it go.”

Ko was resilient, also shrugging aside a challenge from veteran Cristie Kerr, who pulled into a tie with her on the homeward nine.

Ko, who proudly bears the flag of her native New Zealand on her golf bag, started the final round in fifth place, three shots behind co-leaders Laura Diaz and Lee-Anne Pace.

While they foundered, she crept up the leaderboard with birdies at holes 3 and 4. She tied for the top spot with a 12-foot birdie putt at the par-3 eighth, then took a solo lead for the first time after hitting her approach to 10 feet at the 10th.

Kerr, seeking her 17th career victory, rolled in a left-to-right breaker from 15 feet at the 13th to pull even. But her approach on the 399-yard, par-4 15th missed left and settled into heavy rough. She muscled the pitch shot onto the green, but it rolled 6 feet past and she lipped out the par putt.

Kerr, who shot a 67 to finish three shots back in third, failed to apply pressure when she could not birdie the closing two par-5s.

Ko hit a pitching wedge from 121 yards to 6 feet past the pin, then rolled in the downhill putt for a two-shot lead at the 16, but Ryu birdied four of six holes late in her round to tie.

Playing in the pairing immediately in front of Ryu, Ko hit three perfect shots on the closing par-5, which is bisected by a large, deep valley with a creek at the bottom. Her 72-yard chip shot nestled 4 feet away and she drilled it into the heart of the hole to regain the lead.

Ryu’s third on the final hole ended up pin-high and 6 feet away. But she pushed the putt off the right edge, the large gallery groaning as the ball rolled past.

Diaz, who led almost from the start after birdieing her first five holes on Thursday, lapsed to a 75 and finished at 277.

Ko came into the round, which was delayed an hour by fog, vowing to shoot a 65. After she did it and collected the routine over-sized cardboard check, she pondered what she might do now that she’s a millionaire.

“I may do one of those teenage things – like getting something electronic,” she said with a grin. Rebecca Lee-Bentham earned a 12th place finish with a 68 in the final round.

Rebecca Lee-Bentham of Richmond Hill, ON earned a 12th place finish with a 68 in the final round alongside Quebec’s Maude Aimee Leblanc who finished  tied for 54th at 2-under.