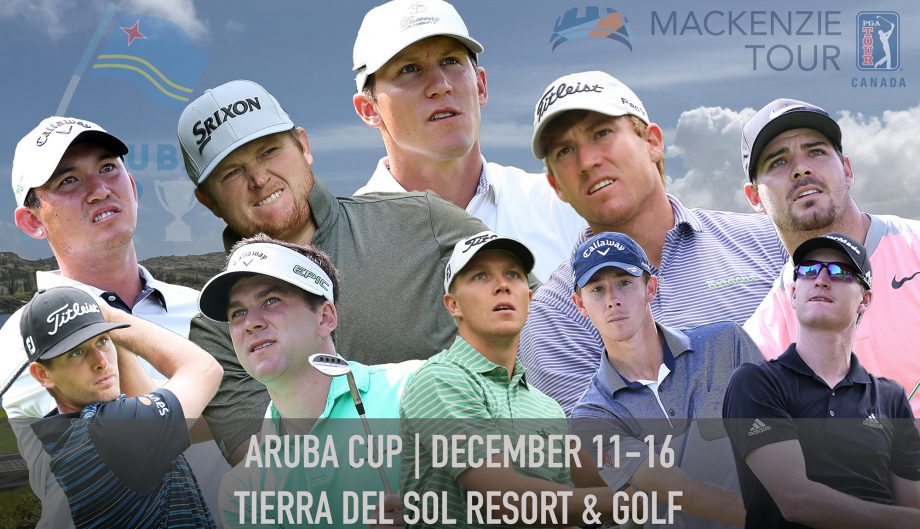 The Mackenzie Tour – PGA TOUR Canada announced its 10-man team for the second annual Aruba Cup on Thursday, led by two-time winner and 2017 Player of the Year Kramer Hickok.

The team, consisting of the top-10 players on the 2017 Mackenzie Tour Order of Merit, will compete against a team of 10 players to be announced from PGA TOUR Latinoamérica in a Presidents Cup-style event at Tierra del Sol Resort and Golf in Aruba, Dec. 11-16, 2017. The three competition days will four-ball, foursome and singles matches on December 14, 15 and 16, respectively. The PGA TOUR Latinoamerica team will be announced following the season-ending Shell Championship in Miami, Florida, from Nov. 30-Dec. 3.

“I’m so excited to tee it up with the guys and compete for the Aruba Cup this year. We had so many strong players compete on the Mackenzie Tour this year and I can’t wait to play alongside these guys.” said Hickok, who won twice in 2017 on the way to earning Player of the Year honours and exempt status on the Web.com Tour for 2018. “It’s going to be a great way to celebrate the end of an awesome year, and I’m really looking forward to spending some time with the team in Aruba.”

“These players have proven themselves as great players this year and throughout their young careers so far. I’ve already gotten to know the guys a little bit and I’m so excited to lead them into competition this year at the Aruba Cup,” said Mackenzie Tour Team Captain Ben Silverman. “We know the team from PGA TOUR Latinoamérica will be tough to beat, and I’m looking forward to some great matches in Aruba.”

Below is the 10-man roster for the Mackenzie Tour team: