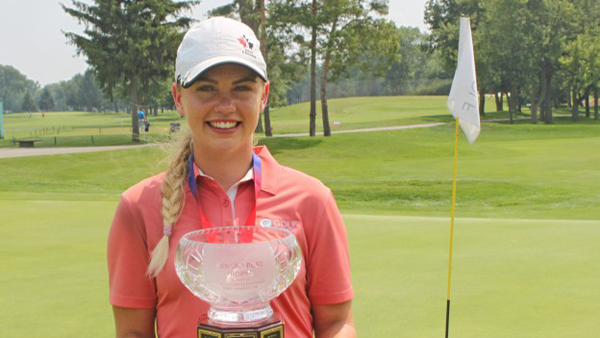 WINDSOR, ON — The Golf Association of Ontario’s (GAO) Juvenile (U17) Girls’ Championship, held in conjunction with the Ontario Summer Games, came to an end on Aug. 10 at the Roseland Golf & Curling Club in Windsor. When the final putt was drained, it was Ridgeway’s Madeline Marck-Sherk who walked away with the Juvenile Girls’ trophy and the Ontario Summer Games’ gold medal.

Marck-Sherk, 16-years-old from the Bridgeway Country Club and the GAO’s Waterloo Regional Team, got out to a great start during the round with birdies on the first and third holes. She would add an eagle on the 14th and finished the day two-under (70) to end the tournament at even par.

“It was a big week for me. I was able to drain some putts today and with a score of 70, I can’t have any complaints. It was such a great tournament and I am just so happy to have won this,” said Marck-Sherk.

After the round, Marck-Sherk credited her performance to her strong putting. “The early putts helped a lot, I was able to keep the momentum going and continue strong throughout the round. Coming into the tournament I knew there was a chance for me to win and making it to the final group, I knew there was a possibility.”

Finishing second was Ottawa’s Grace St-Germain. The Team Ontario and Hylands Golf Club member finished the day one-over (73) to end the tournament at five-over. Marck-Sherk spoke about what playing in the final group with the 2014 Canadian Junior Girls’ and Quebec Women’s Amateur champion was like. “It was tough, I knew she would be tough competition. We are good friends and I was honoured to play with her. She played well today, the nerves were there for me, but I was able to overcome them.”

Picking up the bronze medal was London resident and London Hunt and Country Club member Isabella Portokalis. Portokalis, a Waterloo Regional Team member, finished the day one-over (73) and ended the tournament at eight-over.

For the final leaderboard, visit the tournament site here.

The Ontario Juvenile Girls’ Championship features the province’s best junior golfers under the age of 17 competing for the Sandra Post trophy. Past champions of the event include Post, Jessica Shepley, Alena Sharp, Stephanie Sherlock, and Rebecca Lee-Bentham. This year the event was contested as part of the 2014 Ontario Summer Games.