Making her move: Augusta James starts career as a professional 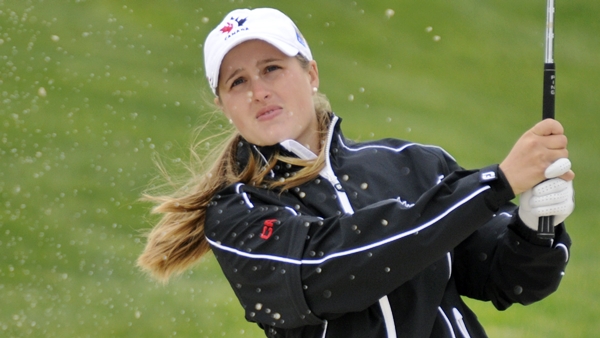 James, 21, makes the leap to the professional ranks following another strong season, highlighted by a six-stroke win at the Canadian Women’s Amateur Championship in July. The N.C. State senior will join the Symetra Tour with full-status for 2015—earned by way of LPGA Qualifying School. The sports management major plans to complete her degree by collecting credits periodically throughout the season.

The decision comes just months after James played a pivotal role in guiding Canada to a silver medal at the World Amateur Team Championship in Karuizawa, Japan. She will look to hit the ground running at the Symetra Tour’s first event of 2015—The Gateway Classic at Longbow Golf Club—from Feb. 20-22 in Mesa, Ariz.

James, a three-time all-ACC player, has already gained some valuable experience playing in professional events as an amateur; her best finish saw her come away T108 at the 2011 Canadian Women’s Open.

As her four-year stint with Team Canada comes to a close, James is grateful for the support she has received and reflects positively on her time with the national team program.

“Being a part of Team Canada has prepared me in the best way possible to make this important jump in my career,” said James. “I look back and am so thankful for all the experience I’ve gained and the relationships I’ve built with coach Tristan (Mullally), the supporting staff and of course the other girls on the team.”

At such an important juncture in her life, James is playing with focus and confidence as she prepares to transition into the professional ranks.

“I’ve been playing really strong golf of late, and have no doubts that I am ready to take on this challenge. Now is the right time for me.”

Click below to listen to Augusta’s announcement in its entirety.