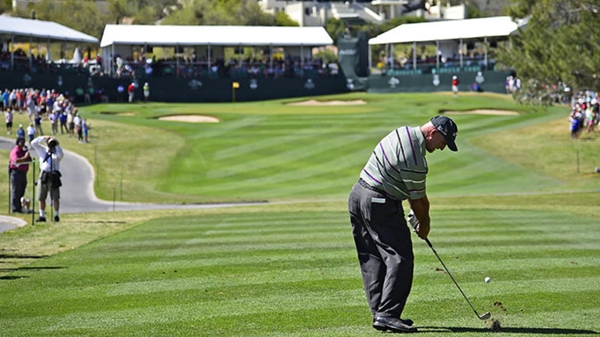 TUCSON, Ariz. – Marco Dawson won the Tucson Conquistadores Classic on Sunday for his first Champions Tour’s title, breaking a tie with a 20-foot birdie putt on the par-4 16th hole and closing with two pars for a two-stroke victory.

The 51-year-old Dawson shot a 3-under 69 to finish at 13-under 203 in the first-year event at Tucson National, the longtime home of the PGA Tour’s defunct Tucson Open. He opened with consecutive 67s to take a one-stroke lead into the final round.

“I’m just thinking about all the work I put in over the years, especially the last few years – more mental work than anything,” Dawson said. “I’m really happy with the way I played. I’m just glad I played the game that I wanted to play.”

Dawson won in his 21st start on the 50-and-over tour. He’s winless in 412 PGA Tour starts and has one victory in 161 events on the Web.com Tour.

Dawson bogeyed the par-4 15th to fall into a tie with Bart Bryant at 12 under. On the 16th, Dawson’s birdie putt barely tumbled in, and Bryant made a bogey after driving into a bunker.

Bryant had a 70 to finish second for the second straight event. He lost a playoff to Lee Janzen last month in Naples, Florida.

Tom Pernice Jr. was another stroke back after a 68.

Canada’s Rod Spittle tied for 21st at 4-under, while Stephen Ames was 1-under and tied for 37th.

Jesper Parnevik struggled in his Champions Tour debut, shooting 71-74-71 to tie for 42nd at even par. The five-time PGA Tour winner turned 50 on March 7. He missed the cut two weeks ago in the PGA Tour’s Puerto Rico Open after injuring his back in a fall during a practice round.