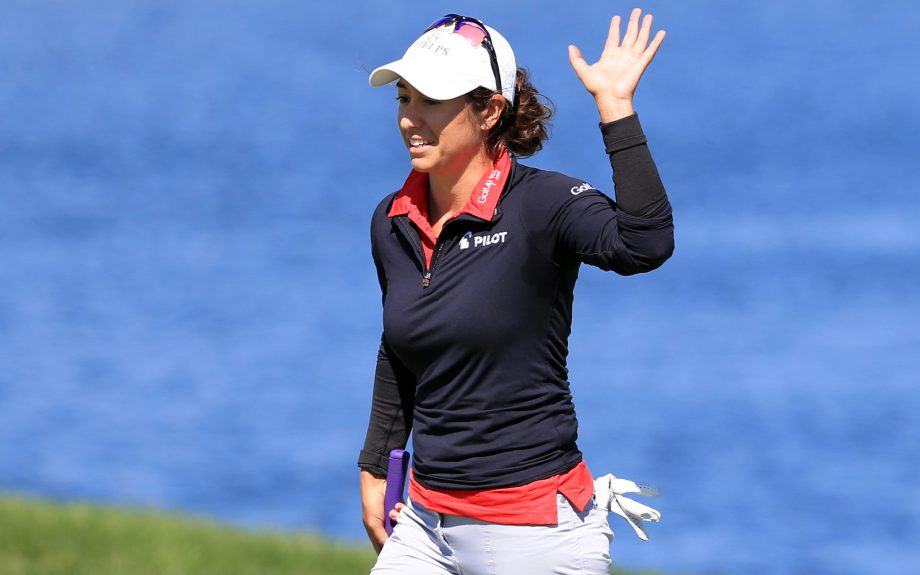 CAMBRIDGE, Ont. – Marina Alex eagled her final hole for an 8-under 64 and the second-round lead Friday in the LPGA Manulife Classic.

Alex played the final five holes in 5 under for the lowest score in her LPGA Tour career, setting up the 18-foot eagle putt with a 5-wood approach on the par-5 ninth.

“Super happy,” Alex said. “Just kind of everything fell together, ball-striking, putting. I actually left a couple of putts out there, but I’m not going to complain about the score that I shot.”

The 26-year-old former Vanderbilt player had a 10-under 134 total at Whistle Bear for a one-stroke lead over Thailand’s P.K. Kongkraphan and South Korea’s Hyo Joo Kim.

Second-ranked Ariya Jutanugarn was four strokes back after a 68 in her bid to win three straight events for the second time this season. Using a driver in competition for the second straight day after shelving it for months, the 20-year-old Thai player had an eagle, six birdies, two bogeys and a double bogey.

She began the streak at the Women’s British Open, and rebounded from a knee injury that forced her to withdraw during the Rio Olympics to win the Canadian Pacific Women’s Open on Sunday in Alberta.

Playing in the second group of the day off the 10th tee, Alex took advantage of calmer conditions than she faced Thursday afternoon in a first-round 70.

She had eight birdies and two bogeys.

“It actually is a pretty wide-open course, which is sometimes for me a little challenging because it’s hard to pick out targets,” Alex said. “But I’m trying really hard to focus, be as narrow as possible off the tee and into the green and just be very specific with what I’m trying to do.”

Kongkraphan had a bogey-free 66. She recently went through coaching and club changes.

“I have a problem with my iron pretty bad,” Kongkraphan said. “I tried to get better, so I switched the club and changed the coach. … From last week I have so much more confidence.”

Kim closed with a birdie for a 67. She won the season-opening event in the Bahamas.

South Korea’s Mi Hyang Lee was 8 under after a 67. She had a hole-in-one on the fifth hole.

“I think just less wind and the greens more better condition,” Lee said. “So just everything is perfect.”

U.S. Open champion Brittany Lang, second last year at Whistle Bear after winning the inaugural event in 2012 at Grey Silo, was 6 under after a 71.

Defending champion Suzann Pettersen had a 71 to reach 4 under.

Canadian star Brooke Henderson, playing alongside Jutanugarn, shot 71 and sits 3-under alongside Anne Catherine Tanguay of Québec City. Henderson of Smiths Falls, Ont., eagled the par-5 12th and closed with a birdie.

“Not exactly what I was looking for,” Henderson said. “That birdie on my last hole kind of made me feel a lot better about the day, which is always nice, and 3-under par, I can’t complain too much.”

The 18-year-old Henderson beat top-ranked Lydia Ko in a playoff in June in the KPMG Women’s PGA for her first major title, and successfully defended her Portland Classic title in early July.

“I putted much better today, so it was good to see some putts go in,” Ko said. “Without the putter, I don’t think I would have been able to shoot even par.”

Alena Sharp was the top Canadian, shooting a 70 to reach 5 under. She tied for fourth last week at Priddis Greens for her best finish on the tour.

“I didn’t make many putts,” Sharp said. “It was tough to get it close to the pins. I thought they were a little trickier today. The greens are definitely firming up, so you got to hit high shots in.”

Fellow Canadian Maude-Aimée Leblanc of Sherbrooke, Que., holds a share of 22nd at 4-under.