Mario Brisebois to be inducted into Quebec Golf Hall of Fame 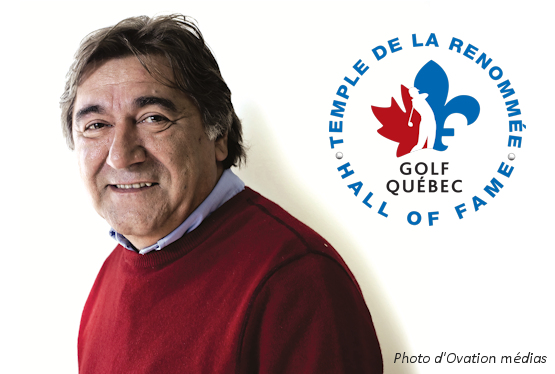 MONTREAL, Que. – Golf Québec is proud to announce that Mario Brisebois, the well-known columnist of Le Journal de Montréal, current blogger for Golf Canada and mongolf.ca, and precious collaborator of the Golf International magazine, will be inducted into the Québec Golf Hall of Fame.

Native to the Mauricie area, Mario stood out from the crowd during his years as a junior at the Club de golf Shawinigan and on the provincial stage. As a matter of fact, he was selected to represent Golf Québec, formerly known as the Québec Golf Association (QGA), in the prestigious competition for the Williamson Cup held in 1970 at the Aronimink Golf Club, in Philadelphia. This was a huge honour in his region where very few juniors had the opportunity to participate in such high level tournaments.

Later on, his studies and budding career as a journalist at Le Journal de Montréal kept him too busy to participate in sporting events. As a result, he stopped competing in amateur golf tournaments. Fortunately, Mario’s love for the game of golf continued. In 1973, he had the best seat in the house to witness Jocelyne Bourassa’s triumph at the Canadian LPGA event, La Canadienne, held at the Montréal Municipal Golf Club. And rightly so, as he was nothing less than the official caddy of the legendary competitor, also a Shawinigan native, in this historic championship.

Throughout his career as a journalist, Mario dedicated his time to covering golf, tennis and skiing. He always made a point to understand every aspect of the sport he was writing about. For this reason, he was honoured in 1985 as Best Journalist by Tennis Québec and was inducted in the Laurentian Ski Hall of Fame in 2003.

Mario always attached great importance to supporting Québec’s hopefuls. Many athletes, both amateurs and professionals, benefited from exceptional media coverage throughout their athletic development. A warm, cheerful and energetic character, he always promoted sports with extraordinary generosity throughout the province and in Canada. His work and leadership have earned him the recognition and respect of athletes and the entire industry.

At Golf Québec, more specifically, we are grateful for Mario, who along with a group of colleagues created the Pierre-Nadon Prize in 2005. Every year, the recipient of this honour is a person who has contributed in an exceptional way to the development and promotion of golf in Québec.

Mario will become the 29th member inducted into the Québec Golf Hall of Fame during a ceremony to be held at a date later this year.