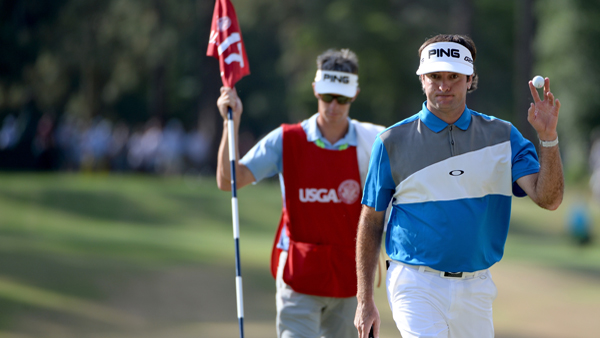 Too bad it came a day late.

Watson shot an even-par 70 on Friday, not enough following an opening 76 that ultimately cost him a shot of playing on the weekend.

“It’s easy today,” Watson joked. “After you’re out of it, it’s kind of easy just to go around and play golf.”

Watson finished at 6-over 146 to miss the cut by a stroke.

Jason Dufner, Luke Donald, Charl Schwartzel and Hunter Mahan – – done in by a two-shot penalty for playing the wrong ball on his ninth hole – also dropped out after finishing at 6 over. Dufner has missed the cut in two straight majors after winning the PGA Championship.

Watson won his second green jacket in three years in April – his second PGA Tour victory this year – then led late at the Memorial before faltering and finishing third. He arrived at Pinehurst hoping to become the first player since Tiger Woods in 2002 to win the year’s first two majors.

But he never gave himself a chance, his stay cut short by Thursday’s miserable round of five bogeys and one double-bogey – a performance that had Watson lamenting that the course “is better than me right now.”

He got off to a better start Friday on a layout softened by overnight rain with birdies on two of his first three holes. He was more accurate hitting fairways and greens while also making more putts than a day earlier, but three bogeys in four holes just before the turn did him in.

Watson tied for fifth at the U.S. Open in 2007 at Oakmont, but has missed the cut three times since.

“The greens are very difficult,” Watson said about Pinehurst. “For me personally, I don’t like the look of it. The targets are really small to try to hit the greens. You’ve got to hit the ball really straight I believe to hit it in the 10-foot circles on each green. So for me, it’s just a very difficult course.”

Donald was worse off than Watson after a 7-over 77 in his first round. He was much better Friday with only one bogey and a 69, but missed the U.S. Open cut for the second time in three years.

Meanwhile, Schwartzel – paired with Watson and top-ranked Adam Scott – went the opposite direction. After an even-par 70 on Thursday, he had five bogeys and two double-bogeys en route to a 76 on Friday.

Dufner, who missed the cut by six shots at the Masters, had 11 bogeys over two rounds and shot 74 on Friday. He had tied for fourth in the past two U.S. Opens.

Then there was Mahan.

A year after playing in Sunday’s final group, Mahan was penalized when he and Jamie Donaldson each mistakenly played the other’s ball in the 18th fairway following their tee shots. That two-shot penalty dropped Mahan below the cut line.

John Wood, Mahan’s caddie, took the blame because he was the first one to reach the ball.

“You can’t imagine yourself doing something colossally as stupid as that, but I did it,” Wood said. “I won’t forgive myself very soon after this.”

Donaldson also missed the cut, shooting 81 on Friday after an even-par first round to finish at 11-over 151.