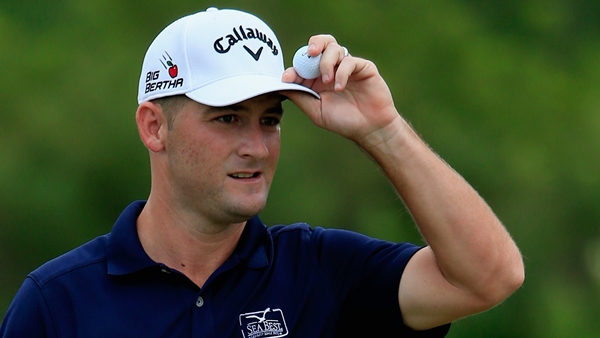 ORLANDO, Fla. – Matt Every won the Arnold Palmer Invitational for the second straight year, making an 18-foot birdie putt on the 18th hole at Bay Hill to beat Henrik Stenson and earn another trip back to the Masters.

Every rallied from a four-shot deficit last year for his first career victory. This one was even sweeter. He came from three shots behind Sunday with a 6-under 66, and he had to make the biggest putt of his career to get that handshake with the tournament host.

“The one on 18, straight downhill,” Every said. “That’s what you want under pressure.”

Stenson closed with a 70 and extended a curious streak on the PGA Tour. It was the ninth straight tournament in which a 54-hole leader failed to win, and the Swede let this one get away.

He regained the lead with birdies on the 11th and 12th holes as Morgan Hoffmann began to fade, and Stenson had a one-shot lead with four holes to play. But he three-putted from 45 feet on the 15th, and three-putted again for par from 40 feet on the fringe at the par-5 16th.

Needing a birdie to force a playoff, Stenson was wide left on a 20-foot putt at the 18th.

Every finished at 19-under 269 and became the first player since Payne Stewart in 1987 to win at Bay Hill with all four rounds in the 60s.

A year ago, Every missed a 4-foot par putt on the 18th hole and had to wait a nervous 10 minutes to see if anyone could catch him. This time, he had no room for error. With a confident swing that held up all week, he drilled his drive down the left side of the fairway and hit his approach above the hole to set up his birdie.

He joined Tiger Woods and Loren Roberts as the only players to repeat at Arnie’s place. Woods won four in a row, and back-to-back on two other occasions. Roberts, like Every, won his first two PGA Tour titles at Bay Hill.

Matt Jones birdied three of his last four holes for a 68 to finish alone in third.

Hoffmann had a two-shot lead after a birdie on the eighth hole, but it was a struggle the rest of the way. Stenson caught him on the 11th, and Hoffmann made bogey on his next two holes to fall three shots behind. He hit his tee shot out-of-bounds into a backyard on the 18th hole for a double bogey and a 71 to finish fourth.

Rory McIlroy, in his final tournament before he goes for his third straight major and the career Grand Slam at the Masters, closed with a 70 and tied for 11th. The world’s No. 1 player had only one round in the 60s in his three events on the Florida swing.

“The main goal was to come here and try to win,” said McIlroy, who played Bay Hill for the first time. “Couldn’t do that. At least I got a couple of things out of this week, which is good.”

Every left Bay Hill a year ago believing he could win the Masters on his first try. He missed the cut and had only one top 10 the rest of the year. But he changed coaches in the fall and began working with Sean Foley to tighten up areas in his game.

Now he heads to Augusta with more confidence, and believes he has a swing that will get him in these positions more often.

Sam Saunders, the 27-year-old grandson of Palmer, closed with a 73 and tied for 29th.