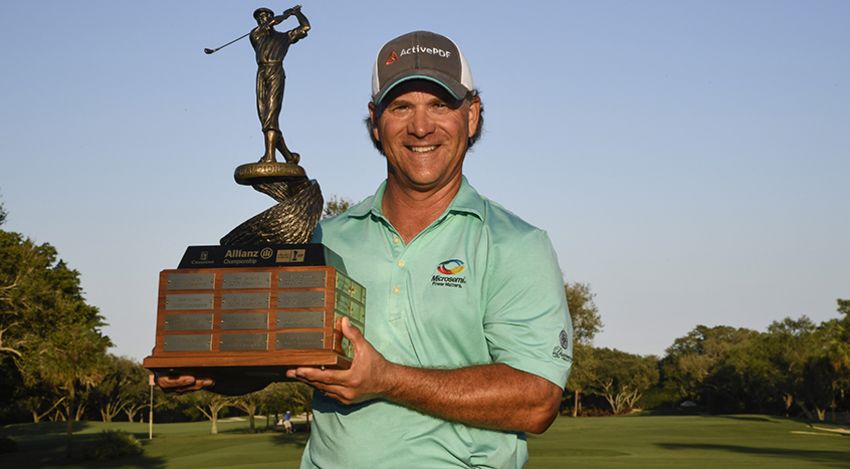 BOCA RATON, Fla. – The Allianz Championship is where eagles dare, and it was entirely fitting that Scott McCarron’s victory Sunday came as the result of an eagle on the 18th hole.

For three days under brilliant skies, the conditions were perfect for bird watching and The Old Course at Broken Sound didn’t disappoint. There were 26 eagles and 1,096 birdies, the third most all-time in a 54-hole event on the PGA TOUR Champions.

“All wins are exciting but this one, to be able to finish it off the way I did, really something special,” he said. “It was a very good day.”

With Kenny Perry and Carlos Franco in the clubhouse (actually, Perry was on the practice range staying prepared for the possibility of a playoff) at 16-under 198, center stage belonged to McCarron in the last group. He produced an inviting final act.

A bogey at the 17th hole had dropped McCarron back to 15 under but with the 18th lurking – it’s a short par five of 507 yards by modern standards – McCarron was still easily in the mix. He needed a birdie to join a three-man playoff, an eagle to win.

After an ideal drive, from 179 yards he hit 7-iron to six feet. The winning putt was almost a formality.

“Yeah, no hesitation,” McCarron said. “As soon as I walked up and saw where it was, my caddie and I actually read greens through AimPoint, so he putts a level on every 5-yard grid on the green. I knew exactly where we had a level, right there 2.0 percent slope. I knew as soon as I stepped up what that putt was going to do. I walked around it just because I had plenty of time to do it. I really wasn’t looking at anything else. I knew it was in.”

McCarron’s executive from tee to green was flawless on the deciding hole.

It was clear Saturday night when the smoke had cleared from the second-round shoot-out that there would be more of the same Sunday.

The top 11 on the final leaderboard all shot in the 60s Sunday, ranging from 64s by Kevin Sutherland and Paul Broadhurst, to the 69s by Fred Couples and Doug Garwood.

Canadian Stephen Ames cracked the top-10, following up a 63 on Saturday with a 5-under 67 on Sunday to finish T6 at 14-under. Fellow Canuck Jim Rutledge closed with his best round best of the event, shooting a 7-under 65 to finish T62 at 2-under.

Perry, extending his solid play for the week, shot 66. His attempt for an eagle putt at the 18th, three groups before McCarron, narrowly missed.

“I hit a great putt,” Perry said. “Just a great putt. It was in the middle of the hole, a foot from the hole, and it just broke a hair to the right, hit the right side of the cup and spit it out.”

Franco’s number starting the final round was 63. His inspiration came from the Maybank Championship Malaysia where a protégé, 33-year-old Paraguayan Fabrizio Zanotti, shot a final-round 63 Sunday to win the title in the European Tour event.

Zanotti has modeled his golf after Franco but this time it was Franco who was playing follow-the-leader.

“I played very solid the last 27 holes,” Franco said. “(Saturday) on the back nine I shot 5 under and today I played really, really confident. Only three behind the leader and I know exactly what I need to make. My number today is 8-under and I shoot 65.

It didn’t quite happen but neither did it discourage Franco.

“I’m happy,” he said. “This golf, you don’t know who’s going to win, especially for the PGA TOUR Champions. The last hole is very important for a chance to win.”

If Franco’s paradigm needed validation, McCarron gave it to him.