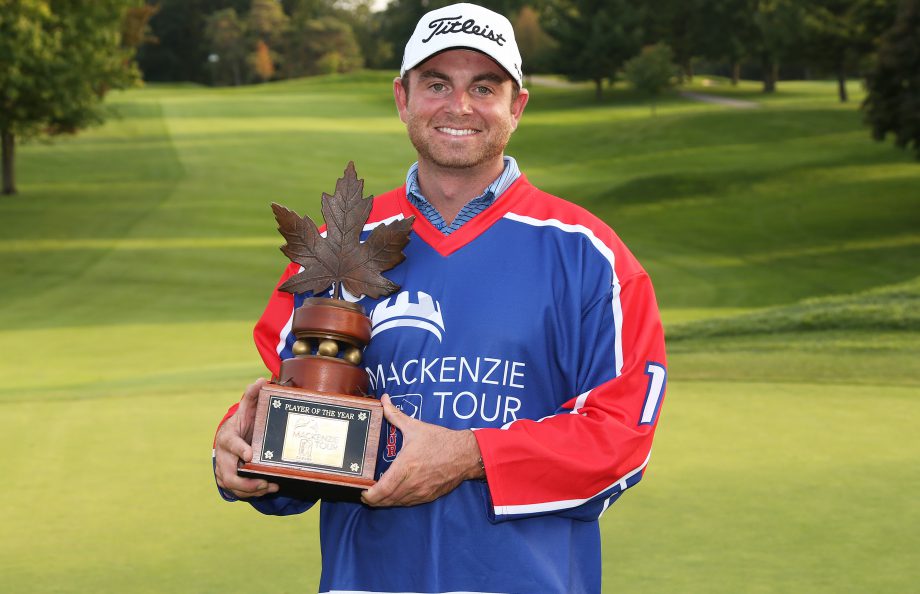 London, Ont. – Dan McCarthy of Syracuse, New York, wrapped up Mackenzie Tour – PGA TOUR Canada Player of the Year honours on Sunday, finishing with $157,843 in earnings on the season to top the Order of Merit and lead five players who earned status on the Web.com Tour for 2017.

McCarthy, 31, who produced a unprecedented season of four wins and the all-time record for single-season earnings, will be fully exempt on the 2017 Web.com Tour after finishing $73,768 ahead of No. 2 Brock Mackenzie of Yakima, Washington. Joining McCarthy and Mackenzie in The Five were No. 3 Taylor Moore of Richmond Hill, Ontario, No. 4 Aaron Wise of Lake Elsinore, California and No. 5 Adam Cornelson of Langley, B.C.

The Five will graduate to the Web.com Tour in 2017 and look to follow in the footsteps of at least nine PGA TOUR-era Mackenzie Tour alumni who will have PGA TOUR status for the 2016-17 season, including 2013-15 Order of Merit winners Mackenzie Hughes, Joel Dahmen and J.J. Spaun.

“Dan’s exceptional play this year has set the standard for excellence on the Mackenzie Tour. What he has done this season in winning four times and setting the new mark is without precedent, and we can’t wait to follow his success as he reaches the next level. We wish The Five the very best of luck as they make the next step on their journey and follow in the footsteps of so many players, including the last three Order of Merit winners, who have gone from the Mackenzie Tour to the PGA TOUR,” said Mackenzie Tour President Jeff Monday.

“This was an unforgettable year for me, and I’m so proud to have earned that fully exempt status on the Web.com Tour next year,” said McCarthy. “The level of competition out here is so good, and my goal at the start of the year was to be in that top five. To see all the hard work I’ve put in over the years come to fruition and finish No. 1 is an incredible feeling.”

The Mackenzie Tour also announced that its 12 tournaments combined to raise more than $1 million for charity, increasing charitable contributions from $567,500 in 2015

“A primary goal of every Mackenzie Tour tournament, along with every event under the PGA TOUR umbrella, is to make a positive impact in the community. Each year, we have pushed to make a larger impact in every community where we play, and I want to thank all of our tournaments along with every player, fan, volunteer and anyone else who helped make a positive difference in peoples’ lives through the Mackenzie Tour this year,” said Monday.

“We are so pleased with the success of the 2016 Mackenzie Tour – PGA Tour Canada and congratulate all of the golfers on their incredible season,” said Barry McInerney, President and Chief Executive Officer of Mackenzie Investments. “At Mackenzie Investments, we believe in striving to bring our best to everything we do and the winners of the Mackenzie Tour exemplify that same confidence and tenacious attitude. Now that we have completed our second season as the umbrella sponsor, we continue to be impressed by the partnership, players and most importantly, the charitable aspect which helps so many communities across Canada.”

Players 6-10 earn spots into Final Stage
In addition to The Five earning status on the Web.com Tour, players finishing 6-10 on the Order of Merit earned an exemption into the final stage of Web.com Tour Q-School, led by No. 6 Paul Barjon of New Caledonia, who won the Freedom 55 Financial Championship to move to No. 6, along with No. 7 Austin Connelly of Church Point, Nova Scotia, No. 8 Max Rottluff of Dusseldorf, Germany, No. 9 Michael Schoolcraft of Denver, Colorado and No. 10 Michael Gligic of Burlington, Ontario.

Players finishing 11-20 earned an exemption into the second stage of Web.com Tour Q-School.