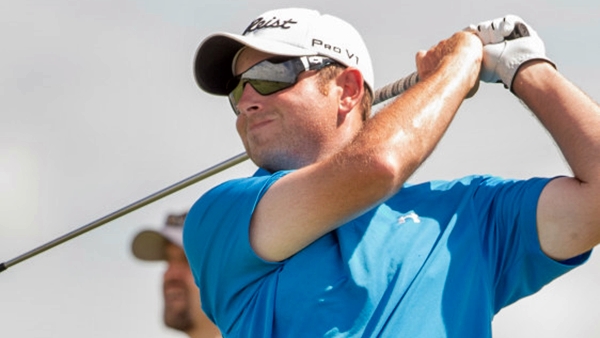 BEON EOIN, NS – Syracuse, New York’s Daniel McCarthy shot a 6-under 66 on Friday at The Lakes Golf Club to take the 36-hole lead at the Cape Breton Celtic Classic presented by PC Financial.

McCarthy, a 29-year old returning to PGA Tour Canada this season for the first time since 2010, went bogey-free on a six-birdie day and led by one over Moscow, Idaho’s Chris Williams through two rounds in Cape Breton.

“It’s nice to see some putts finally going in. I’ve been hitting it pretty well this year, but I’ve struggled a little bit with the putter,” said McCarthy, who sits 44th on the Order of Merit with four top-25s on the season. “I’ve driven it really well and kept it in play. I’ve hit a lot of nice iron shots and rolled in a few putts too, and it’s been two good finishes to the rounds for sure.”

With time ticking down in the 2014 season, McCarthy said he’s still got his mind on the rewards of finishing in the top-20, top-10 and top-5 on the Order of Merit at season’s end.

“Well, I’m 44th coming into the week. You’re still trying to get top-10 or top-5, so I know what I need to do,” said McCarthy. “I’m not changing anything, I’m just trying to hit good shots. Whether the putts go in is whether you’re going to win. Maybe it’s freeing me up a little bit knowing that I have top 60 locked up, so I might as well just go out and give it everything I’ve got.”

One shot behind McCarthy was Williams, who carded his second straight 67 to post 10-under, one stroke further ahead of Order of Merit No. 4 Matt Harmon, Big Break Greenbrier champion Mark Silvers and Forces & Families Open champion Greg Machtaler, who shot a 10-under 62 to reach 9-under par.

After posting top five finishes in each of his last two starts, Michael Gligic kept the strong play going on Friday, chipping in for birdie on his final hole of the day for a 6-under 66 and 8-under total, good for a tie for sixth heading into the weekend.

“I played so well last week, you could be negative because I didn’t win, but I just stayed positive,” said Gligic, who lost in a four-hole playoff to Nate McCoy at The Wildfire Invitational presented by PC Financial. “I’ve been playing too well to get down on myself and wanted to keep it going into this week. So far I’ve been playing half decent, so hopefully I can keep it going this weekend and give myself a chance.”