McDowell’s lead shrinks to one at HSBC Champions 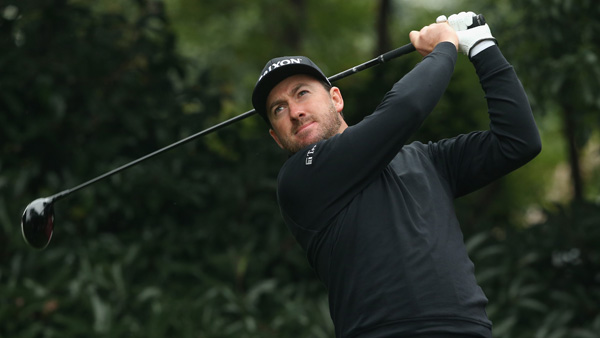 And the mystery is Hiroshi Iwata, the journeyman from Japan and a surprise guest among major champions atop the leaderboard Saturday in the final World Golf Championship of the year.

McDowell ducked in from the cold, gray afternoon at Sheshan International and wrapped his hand around a warm cup of coffee. He did not look the least bit worried after watching a four-shot lead dwindle to one over the final eight holes.

“Let’s be honest. Yes, I had a three-shot lead overnight and it’s only one now,” McDowell said after his 1-under 71. “But I’ll take this position any week that you offer it to me – a one-shot lead going into the last round on a golf course that I enjoy. Looking forward to the opportunity tomorrow.”

Even so, he was under no illusions of the test that awaited him Sunday.

McDowell was at 11-under 205, one shot ahead of Iwata, who made a long, curling birdie putt on the par-5 18th for a 68, and two shots ahead of Kaymer and Watson.

McDowell knows all about the history of Kaymer at Sheshan International, how the German made nine birdies over the last 12 holes to win the HSBC Champions in 2011. Kaymer zoomed into contention Saturday with seven birdies in a round of 66 and will play in the last group.

As for Watson? McDowell played alongside him in the third round and saw plenty.

“Bubba was awfully impressive today – all day,” McDowell said. “The mistake he made on 10 was very uncharacteristic, and then missed a short one on 12. But the rest of his golf was incredible.”

Watson hit a long iron for his second shot at the par-5 eighth that nearly went in for an albatross, only to miss the 4-foot eagle attempt. His big gaffe was a wedge on the 10th that caught a plugged lie in the bunker, followed by a three-putt from 40 feet for double bogey. He three-putted the 17th late in the round. But he also ran off four birdies over the last five holes for a 69 and joined Kaymer at 9-under 207.

“A couple three-putts today and a double bogey. That’s sad,” Watson said. “But the birdies down the stretch really helped out.”

And what to make of Iwata?

McDowell had never heard of him until Saturday. He had never seen him until looking at one swing as Iwata played in the group ahead.

“It seems that Japan is kind of in a purple patch producing great young players,” McDowell said. “I saw him make one swing today – looked like a beautiful golf swing. Looking forward to seeing what it’s all about tomorrow, and he seems like a nice kid. But genuinely, I’ve never heard of him.”

That much is clear – and can be expected.

For one thing, this “nice kid” is a 33-year-old in his 10th year on the Japan Golf Tour. And perhaps the reason Iwata is not as well known as the other Japanese players is that he has only one victory – and that was two months ago in the Fujisankei Classic.

But he held up beautifully against a world-class field in the HSBC Champions, at least through 54 holes.

“Maybe tomorrow coming up the last few holes, I might get a little bit nervous, but so far I’m calm,” Iwata said. “So I think I’m doing OK.”

McDowell really didn’t do anything wrong to lose so much of the four-shot lead. He tried to miss in the right spot on the par-5 14th hole and pulled his 3-wood into a bad spot, preventing him from a simple up-and-down. He flew a wedge way too far on the short 16th – where Watson and Ian Poulter both made birdie – and had to settle for yet another par. It’s just that pars weren’t enough in the dynamic closing stretch at Sheshan International, and they might not be enough on Sunday.

This is more than a four-man race.

Rickie Fowler recovered from a double bogey in the water on No. 9 for a 69. He was only three behind, along with Tim Clark of South Africa, who also had a 69. Poulter had a cold putter and a 72 and was four shots behind with Thorbjorn Olesen of Denmark, who had a 69.

“I felt maybe a tiny bit negative coming in,” McDowell said. “But when I went back and sort of thought through my round, you know, it was difficult. … I wouldn’t say I felt loose coming in, but I also knew it wasn’t something I had to start protecting. I hit a lot of good putts today that didn’t go in, and that’s probably the main difference between shooting 1 under and 3 or 4 under today.”