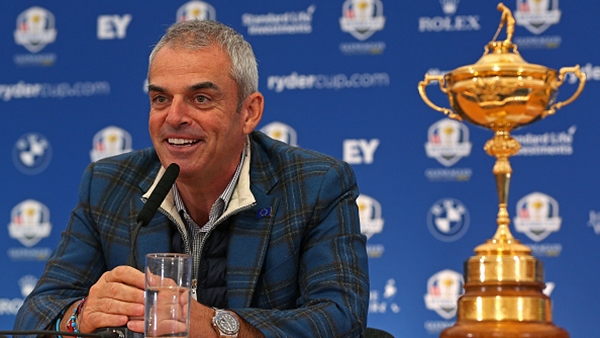 GLENEAGLES, Scotland – Paul McGinley is ready to call it a career in the Ryder Cup, and it ended on a perfect note.

McGinley made his debut in 2002 at The Belfry by holing the winning putt for Europe. His final act was captain of another formidable team, and he called all the right shots at Gleneagles as Europe sailed to its eighth win in the last 10 Ryder Cup matches.

In between, he played in two other Ryder Cups (both record wins for Europe) and was an assistant twice.

“That’s six Ryder Cups now I’ve been involved in and six wins,” he said. “I do feel lucky.”

After another celebration that lasted into the early hours Monday, McGinley says he won’t take part in another Ryder Cup, at least not in an official capacity.

“I’ve gone from a player to a vice captain to a captain. I’ve been six out of six. I’ve been very lucky that I’ve had six great experiences,” McGinley said. “I’m very happy to help going forward in an unofficial capacity.”

Two of his assistants at Gleneagles previously were captains – Sam Torrance in 2002 and Jose Maria Olazabal in 2012. McGinley said his personality would not allow him to return after being at the pinnacle of European leadership.

“I’ve put so much on the table,” he said. “I would like to be able to support the next captain in whatever direction he went, and if I had a belief about a different area, I’m afraid there would be conflict. So I can’t see myself doing that role again.”

His job for the European team is not over yet.

McGinley will join Olazabal and Colin Montgomerie on a five-member panel that decides the next captain for the 2016 job at Hazeltine. European Tour chief executive George O’Grady and a player from the tournament committee fill out the panel.

Darren Clarke is among those under consideration. McGinley and Clarke had a falling out two years ago when Clarke was up for the 2014 job, stood down and then backed Montgomerie because he thought Europe needed a big personality to match U.S. captain Tom Watson, who has iconic status in Scotland.

McGinley pledged there would be “absolutely no problem whatsoever” when he serves on the panel.

“I’m going to get a large opinion from a lot of players and a lot of people before I put my opinion forward,” McGinley said. “I think a lot of us benefited hugely from being vice captains. Darren has been a vice captain, along with many other guys, as well. So we will see where that all evolves, and I certainly won’t have no issues with that whatsoever. I’ll make a professional decision based on the views of the people I respect.”

McGinley was not ready to think that far forward. He still was buzzing from a big night in the team room, and some photos on Twitter illustrated the happy occasion. Among the more unusual photos was Rory McIlroy dressed in only a tartan skirt with a red wig, posing with Stephen Gallacher.

McGinley some of the Europeans ventured into the team room of the Americans to play table tennis and “we got our (butt) kicked.”

“I’m glad the Ryder Cup is not a table tennis championship,” he said.

McGinley said his last Ryder Cup and first Ryder Cup were filled with the same satisfaction, though not quite the same emotion. He was the player who hit the winning shot for Europe at The Belfry in 2002. He didn’t hit a single shot at Gleneagles.

“The buzz at The Belfry was incredible. It was the first time I felt that kind of ecstasy, that sense of `Wow!’ It was an explosion of joy,” he said. “Yesterday wasn’t quite the explosion because I was very much in management mode. … But the sense of satisfaction is exactly the same.”

The American team filed out of Gleneagles Hotel in the morning, heading for Edinburgh and a charter flight home. It left on a far less unified front as Phil Mickelson said the Americans had strayed from a winning formula under Paul Azinger in 2008 and that Watson didn’t involve his players.

McGinley still hasn’t seen the press conference, which attracted nearly as much attention as Jamie Donaldson’s winning shot into the 15th. He greeted Watson at the hotel on Monday morning before the U.S. team left.

“He’s incredibly disappointed,” McGinley said. “But you know what? He’s got that smile, that steely grin. Tom Watson is Tom Watson. He’s a hard man, and he’s a man I respect. So I have the greatest respect to be able to share this journey with a hero of mine.”