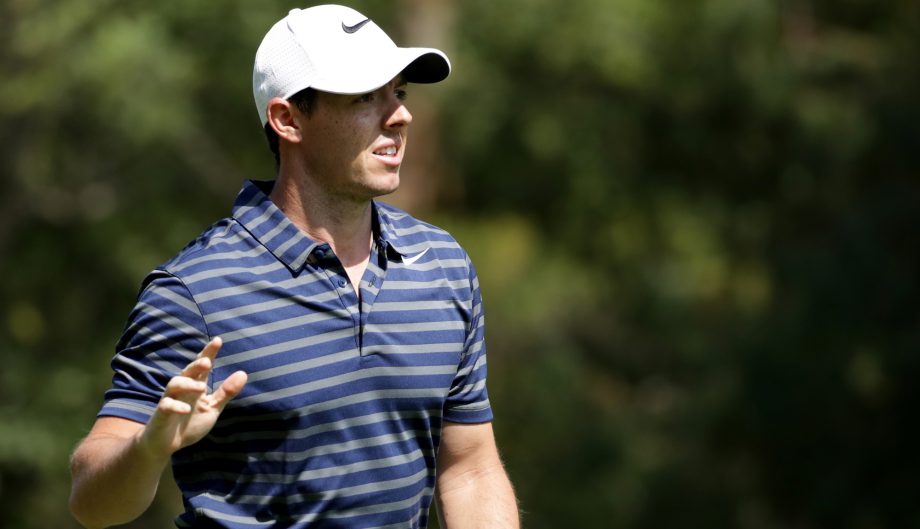 MEXICO CITY – Sore ribs or sore stomach, it doesn’t seem to matter to Rory McIlroy. After being gone for seven weeks, he took a two-shot lead into the weekend at the Mexico Championship with a chance to return to No. 1 in the world.

McIlroy holed out from 156 yards for eagle on the 14th hole, part of a three-hole stretch Friday when he seized control at Chapultepec Golf Club. McIlroy missed putts inside 6 feet on his last three holes – one for par, two for birdie – and still shot a 6-under 65.

“Look, I’m in a great position,” McIlroy said. “But I felt like I could have been a few more ahead.”

He got 14 hours of sleep to help overcome a stomach virus and said he was feeling a little better.

His game looked better than ever.

Mickelson will in the final group on the weekend for the first time since his runner-up finish to Henrik Stenson at Royal Troon in the British Open. And he got there without his longtime caddie, Jim “Bones” Mackay, who fell ill on fourth hole of the second round and turned the bag over to Mickelson’s younger brother, Tim.

Thomas, who won the opening two events of the year in Hawaii, had seven birdies and three bogeys over his last 13 holes.

McIlroy is playing for the first time since losing a playoff Jan. 15 in South Africa. He was diagnosed with a hairline fracture of his rib the next day and missed four tournaments on his schedule to make sure it healed properly. There seems to be little debate about that.

He showed that blend of power and balance in the thin air of Mexico City and struck his irons close for so much of the day. His longest birdie putt was 12 feet, and McIlroy had reason to lament the ones that got away. He missed four putts from 6 feet or closer.

“I just felt like I had a bit more energy. I had a bit more pep in my step,” McIlroy said. “I wasn’t just trying to get through the round today, I was trying to build on the score that I had and it was nice to feel like that again.”

Dustin Johnson, in his debut at No. 1, still watched a number of putts wiggle to the hole on the poa greens and a few more went in. He birdied three of his last four holes for a 66 and was among those just three shots behind and very much in the picture.

Johnson can keep the top ranking if he finishes in the top four.

The only bad hole for McIlroy was at No. 12 where he put his wedge into a bunker, barely got it out of the sand onto the collar and two-putted from 20 feet for bogey. And then he found another gear.

He hit his tee shot to 12 feet on the par-3 13th. From 156 yards out to a soft green, he tried to take a little off a 9-iron and leaned when he saw it going a little too far left of the flag. It bounced out of the rough and rolled into the cup for an eagle. He came up just short of the green on the par-5 15th, setting up a simple up-and-down for another birdie to seize control.

Just like that, he was three shots ahead and was in position to make it a lot more until missing the three putts coming in.

His Ryder Cup partner, Andy Sullivan, matched his low round of the tournament and was in the group at 6-under that included Johnson and Daniel Berger (66).

Missing from the mix was Jordan Spieth, who put on a highlight show when he chipped in for eagle on the 15th, and then played a clever pitch some 30 feet away from the flag and let it roll down the hill and into the cup for a birdie.

That more than wiped out a double bogey on the par-5 11th, but momentum stalled in a big way. Spieth went long at No. 1 into the hedges and out-of-bounds, leading to a triple bogey. He shot a 72 and was 1-over 143 10 shots behind.

He had one thing in common with McIlroy. Spieth also spent more time in the bathroom than in bed the night before from a stomach virus that has been the lone blight on an otherwise strong debut for this World Golf Championship in Mexico City.