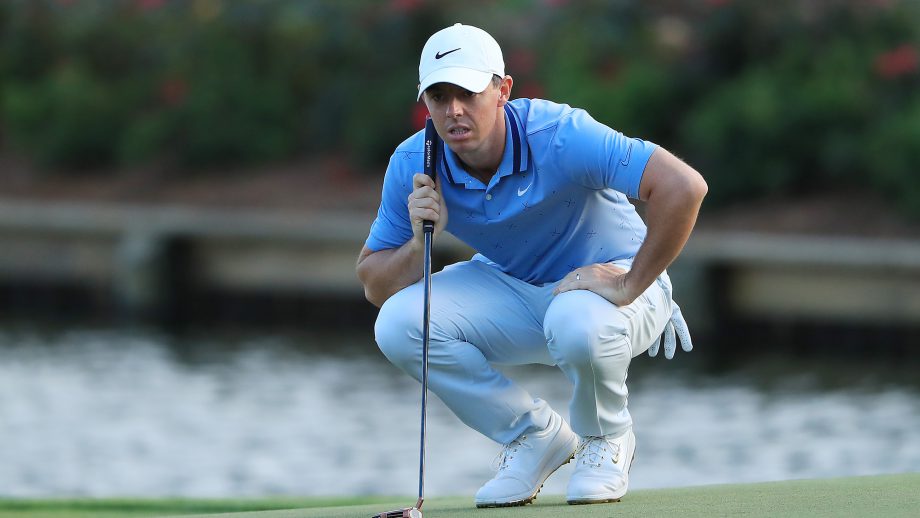 PONTE VEDRA BEACH, Fla. – The easy way out was to go low under a tree 20 feet in front of Rory McIlroy.

He was looking up.

Coming off a 10-foot eagle and a 20-foot birdie that tied him for the lead Friday in The Players Championship, McIlroy risked wasting that great finish with a bold shot. His caddie, Harry Diamond, tried to talk him out of it. McIlroy instead opened the face of a pitching wedge and sent it straight up in the air, letting the right-to-left wind carry it onto the green 15 feet away.

“I stepped over it a couple times like, ‘No, I think I can do this,”’ McIlroy said. “I just opened up a wedge as much as I could and just took a swipe at it, and the ball sort of came out the way I thought.”

He got his par for a 7-under 65 and was tied Tommy Fleetwood, who had a better start than McIlroy finished. Fleetwood opened birdie-eagle-birdie on his way to a 67, giving him a share of the 36-hole lead for the second straight week.

They were at 12-under 132, three shots clear of anyone else.

And they were nine shots ahead of Tiger Woods, who played solid golf except for one hole – the wrong hole. Woods put two balls into the water on the notorious par-3 17th, leading to a quadruple bogey that wiped out a good start and forced him to settle for a 71.

Given the nature of this golf course – and a forecast for a different wind – the fun might just be starting.

And that’s as far as McIlroy was willing to look.

“Winning is a byproduct of doing all the right things, and I feel like if I can continue to do those things well, hopefully I do end up with the trophy on Sunday,” he said. “But there’s a lot of golf to play before that.”

Corey Conners of Listowel, Ont., and Nick Taylor of Abbotsford, B.C., both are 10 shots off the lead at 2 under. Adam Hadwin of Abbotsford missed the cut at 7 over.

The biggest surprise from the group three shots off the lead might be the 48-year-old Jim Furyk, mainly because he didn’t think he would be at Sawgrass. After devoting two years as Ryder Cup captain, his world ranking plunged 194 spots to No. 231. But a great finish at the start of the Florida swing to tie for ninth moved him high enough in the FedEx Cup to get into the strongest field in golf at the last minute.

“I thought this was an off week,” Furyk said. “It’s a nice gift, an opportunity.”

Ian Poulter, who resurrected his PGA Tour career with a runner-up finish at The Players two years ago, had a 66 and was three shots behind, along with Abraham Ancer of Mexico (66) and Brian Harman (69).

Dustin Johnson, the world’s No. 1 player, also had an eagle-birdie-par finish for a 68. He was in the group five shots behind.

McIlroy hasn’t won since Bay Hill a year ago, though he has had his chances for more. The Arnold Palmer Invitational last week was the ninth time in his last 30 tournaments dating to the start of 2018 that he played in the final group without winning.

But he has been patient. He says his attitude has been good all year, and it can be tested severely on the Players Stadium Course. There is no sense of panic or a need to start pressing if he gets into that position again.

“I just need to keep seeing red numbers,” McIlroy said. “I don’t need a win. I’m not putting myself under pressure to … again, winning is a byproduct of doing all the things that I’m doing well. … If I focus on winning, what goes into that?”

After a sluggish start – even par through seven holes – McIlroy ran off four birdies in a five-hole stretch around the turn, and then he poured it on with a 4-iron to 10 feet on the par-5 16th for eagle, and a wedge to the back shelf on the island green for a 20-foot birdie putt.

That was followed by his great escape, so good that McIlroy smiled as he watched a replay of the shot on the large video board as he walked to the green. His 15-foot birdie putt stopped just short of the hole.

McIlroy said he told NBC Sports analyst Roger Maltbie that “playing with Phil the last two days maybe inspired me to play a shot like that.” That would be Phil Mickelson, who didn’t play very inspired, at all. Mickelson had another 74 and missed the cut at The Players for the sixth time in the last seven years.

Fleetwood knows a thing or two about fast starts. Last month in Mexico, he started eagle-eagle.

This felt just as good, perhaps because of his standing in the tournament. Fleetwood, who shared the 18-hole lead, was two behind when he teed off and back in the lead after just two holes. He made a 12-foot birdie on No. 1, holed a bunker shot for eagle on the par-5 second and then made a 25-footer on No. 3.

“I had a great range session warming up, and all you want to do then is make sure you try and take that out onto the course, which was very different,” Fleetwood said. “I had the absolute dream start. … Today was a little bit more up and down, but it’s going to be. There was a lot of good stuff, and I just feel really happy with it.”