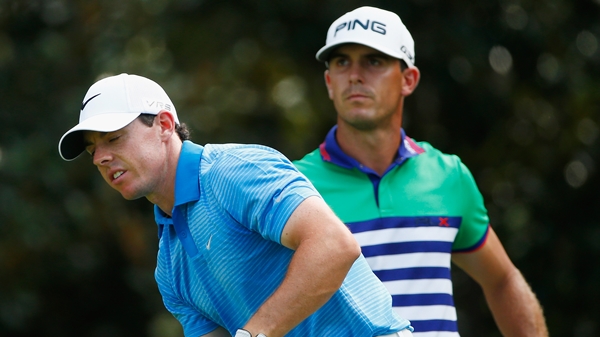 ATLANTA – Rory McIlroy made up a two-shot deficit on Billy Horschel at the Tour Championship on Saturday, setting up a $10 million showdown to end the PGA Tour season.

McIlroy overcame a pair of three-putt bogeys by rolling in a 25-foot eagle putt on the 15th hole, and closing with a tough chip from thick grass behind the 18th green that allowed him to save par for a 3-under 67.

Horschel led by as many as three shots during the third round at East Lake until he dropped two shots on the back nine and had to settle for a 69.

They were at 9-under 201. And they had plenty of company in what was shaping up as one of the most enticing finishes in the eight-year history of the FedEx Cup.

Jim Furyk, winless since he captured the FedEx Cup four years ago, had a 67 and was two shots behind. He would have to win to have any chance of joining Tiger Woods as the only multiple winners of golf’s biggest bonus.

“It’s going to be an exciting day,” Horschel said after posting his 11th consecutive round in the 60s during the FedEx Cup playoffs.

McIlroy has been losing a little energy since that high-charged performance that carried him to major titles in the British Open and PGA Championship, with a World Golf Championship sandwiched in between. He knows he’s already had the best year, and he would like nothing better than to end it right.

“I’ve come here with the ultimate goal of trying to cap it off and trying to put an exclamation point on it or the icing on the cake or whatever you want to call it,” McIlroy said. “Would it be poetic justice? I’d feel really good about it.”

McIlroy says he hasn’t been playing his best, certainly not at the same level as Hoylake or Valhalla, where he won his two majors. But he was good enough. He three-putted the par-3 second hole, missing a 3-foot putt. He had to make a 4-footer to avoid his third four-putt in two weeks.

But all was forgotten when he drilled a 5-iron from 209 yards up the hill on the par-5 13th to the back collar of the green, just over 25 feet from the flag. He knocked that in for a share of the lead, and then hung on with pars.

Horschel, coming off a runner-up finish at the TPC Boston and a victory last week at Cherry Hills, stretched his lead to three shots with a 6-foot birdie putt on No. 8 and matching two-putt birdies with McIlroy at the ninth.

Both players made bogey on No. 10, and McIlroy appeared to be in more trouble at the par-3 11th until the world’s No. 1 player chipped to 8 feet and saved par, and Horschel missed his 15-foot birdie attempt.

“My short game really saved me today,” McIlroy said. “I think the par putt on 11 was a big momentum putt in the round after three-putting 10 and Billy being in there pretty close and just narrowly missing for birdie. I think being able to hole that par putt was big.”

Furyk doesn’t need to do the math. He only knows he has to win, and that was his priority after another year of close calls. Ditto for Fowler (No. 9) and Day (No. 10).

“Really all you can ask for going into the week is to be in a position to win Sunday,” Fowler said. “The tournament is really going to start tomorrow on the back nine. I know pretty much most of the scenarios for me. I know if I win I’ve got a pretty good chance. I know there’s some possibilities of some extracurricular activities if certain things line up properly.”

Fowler first would have to make up three shots on McIlroy, which is not easy under any circumstances. And while McIlroy is running low on fuel, there’s only lap left.