McIlroy and Poulter, a one two punch for Europe at Ryder Cup 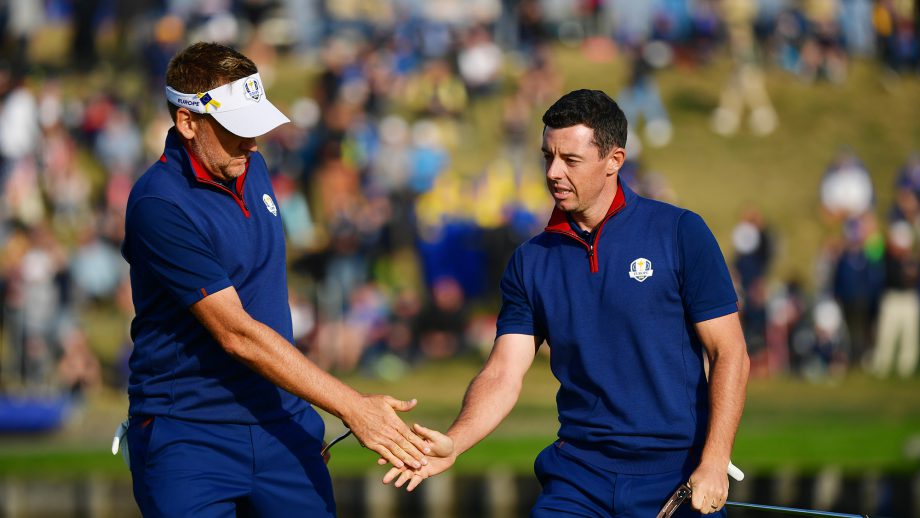 SAINT-QUENTIN-EN-YVELINES, France – He’d had a rough morning, the only player to start Day 1 of the Ryder Cup without making birdie.

The afternoon for Rory McIlroy at Le Golf National wasn’t proving that much better. He found a bunker on No. 2, missed a sinkable putt on No. 3, then another on No. 11. Had it not been for the steadying dependability of partner Ian Poulter, it seemed McIlroy might melt down altogether.

So when, on No. 13, McIlroy decided to go for what seemed like an impossibly optimistic approach shot, alarms rang. Really, Rory? Is this wise?

–The ball was nastily placed, stuck on a steep grass bank and below his feet. McIlroy had to squat to reach it. Slip and he’d slide into the lake directly in front of him. Another lake lurked up ahead, ready to swallow the ball if McIlroy failed to get under it.

That McIlroy delivered the ball onto the green with an assured plop, as though the outcome had never been in doubt, said as much about his mental strength as it did about his golfing skills. It was quite possibly the shot of Day 1 . McIlroy’s grin was ear to ear.

From there, Poulter did the rest, ignoring the stiff breeze that scratched at the ancient oaks which surround the hole. When the ball dropped, Poulter thumped his chest and shoulder-barged McIlroy, who tipped his head back and roared at the sky in joy.

“A little bit of a wind assist to hold its line as it was rolling towards the hole,” Poulter said. “It was nice to see it drop in.”

The one-two blow from McIlroy and then Poulter on that hole knocked the last fight out of the U.S. pairing of Webb Simpson and Bubba Watson. The birdie putt moved the European pairing to 3-up. They wrapped up victory three holes later, winning 4 and 2 to do their bit in an historic Friday afternoon for Europe. All four European pairings won, the first time that has happened in foursomes.

Although McIlroy and Poulter played fourballs together at the Ryder Cups of 2014 and 2012, this was their first pairing in foursomes. They started poorly: Poulter hit into water off the first tee. They were 2-down after three holes.

McIlroy kick-started the recovery with a 7-foot birdie putt on No. 6. Staring intently at a group of U.S. fans in the crowd, he raised a finger to his lips. The message was clear: Zip it.

The European pair won the next three holes, too, for a shift in momentum that McIlroy’s magical shot on No. 13 then helped set in concrete.

Having lost his morning match in a fourballs pairing with Thorbjorn Olesen, the win was a welcome fillip for McIlroy, given that there’s plenty more golf to play.