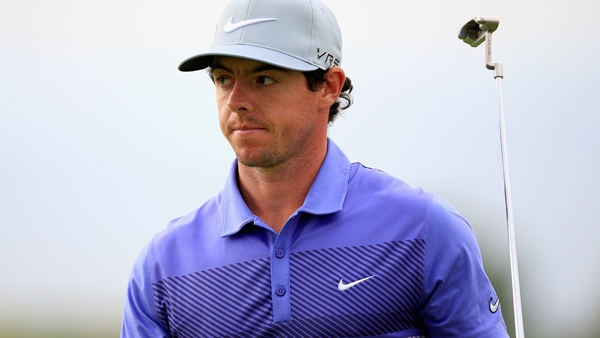 CHERRY HILLS VILLAGE, Colo. – Rory McIlroy felt anything under par was a good score Thursday at Cherry Hills, even if he had reason to expect much better.

McIlroy ran out of par saves late in the opening round at the BMW Championship and had to settle for a 3-under 67, still enough for the world’s No. 1 player to share the lead with Jordan Spieth and Gary Woodland.

Cherry Hills, one of the shortest courses on the PGA Tour when factoring in the mile-high air, held up just fine.

“It’s tricky. It really is,” McIlroy said. “The altitude, we’ve had a couple of days to adjust to that. It’s fine. But these greens have gotten so much firmer over the last 24 hours. I think that’s what is giving the guys just a little trouble out there.”

U.S. Open champion Martin Kaymer, Canada’s Graham DeLaet and Sergio Garcia were among those at 68, while Justin Rose wasted a fast start and was at 69. Phil Mickelson, who won the U.S. Amateur at Cherry Hills in 1990, opened with a 70.

“It reminds me of Augusta in the early `90s, where the course played very short but the greens were the defense,” Mickelson said. “And the greens were very fast, and very firm, and it was very difficult to get the ball close.”

McIlroy ran off four birdies in a five-hole stretch around the turn to reach 5-under par. He appeared to escape trouble with one of his best par saves of the year, hitting a lofted pitch from the side of a mound that landed just on the green and rode the slope to about 8 feet. He avoided a three-putt on the next hole by making a 7-foot par save.

But that was the end of that.

McIlroy failed to save par from the bunker on the next two holes.

Spieth also ran into his share of trouble, though he countered with six birdies and figured out the nasty combination of soft turf in front of the greens and putting surfaces that felt like they had been mixed with cement.

He blasted driver through the fairway on the 382-yard seventh hole because it offered the best angle into the green. The trick was playing the wedge. It came out low and running, something one would expect to see more in links golf, and it had just enough speed to crawl onto the green and settle a few feet away.

“Today, I had a good short game,” Spieth said with a smile, a strong comment from a guy with one of the best short games in golf.

Woodland made only one mistake when he three-putted from about 50 feet on the fourth hole. He birdied both the par 5s, missing an 8-foot eagle attempt on No. 11, and was equally pleased with a par on the 18th hole, which features a severely canted fairway toward the lake and an uphill approach. Woodland hit 2-iron off the tee and a 6-iron onto the green.

“Probably the firmest golf course we have ever seen,” Woodland said. “The greens, they’re concrete out there. So if we don’t get any rain, it can be pretty interesting by the weekend.”

Just his luck, rain arrived late in the day and suspended the first round with nine players still on the course. They will return Friday morning before starting the second round. The field is only 69 players and there is no cut.

Among those who did not finish was Henrik Stenson, who missed a 4-foot par save on his 17th hole – the par-3 eighth – and fell to 2 under. Jerry Kelly, whose eagle on the final hole at the TPC Boston on Monday enabled him to be the last of the top 70 qualifiers for the BMW Championship, was at 1 under with two holes to play.

The top 30 in the FedEx Cup after this week advance to the Tour Championship in Atlanta, where everyone will have a mathematical shot at the $10 million bonus.

McIlroy has proven himself plenty this year, winning the British Open and the PGA Championship, with a World Golf Championship in between. He is No. 2 in the FedEx Cup standings behind Deutsche Bank Championship winner Chris Kirk, though he is assured a clear shot at winning the cup.

Boy Wonder has been saying during these FedEx Cup playoffs that his big year deserves a big finish.

He was hoping for a big round, and almost had one.

“The scoring isn’t that good out there,” he said. “Not that it’s not good, it’s just not that low. It’s tricky. It’s playing a little bit like a U.S. Open. I wouldn’t say it’s quite as difficult as that, but it’s thick rough, especially around the greens, and firm greens. That’s what they need to keep the scoring the way it is.”

McIlroy wasn’t the only player to reference a major championship.

“It felt close to it,” Garcia said. “Obviously, it’s not a long course with the altitude and everything, but a lot of the shots had to be hit perfectly to be able to hit it close to the pin.”