McIlroy, Simpson and Kuchar lead heading into final round of RBC Canadian Open 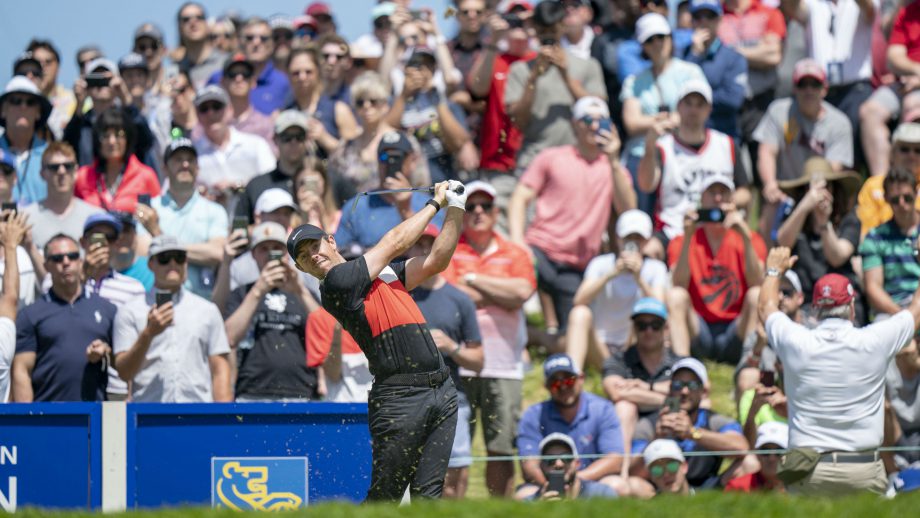 HAMILTON, Ont.  — Rory McIlroy, Matt Kuchar and Webb Simpson sit in a three-way tie for the lead at 13-under par heading into the final round of the 2019 RBC Canadian Open at Hamilton Golf & Country Club.

McIlroy catapulted to the top of the leaderboard with a 6-under 64. He was bogey free, while knocking in six birdies and says he has been enjoying the atmosphere during his first visit to Canada’s National Open Golf Championship.

“It’s probably the best atmosphere I’ve played in in a long time,” said McIlroy. “The Canadian fans really come out and support this event. That 13th hole there [The Rink] is pretty cool. I think what they’ve been able to do here is right on the limit of fun, but still in keeping with the traditions of the game, so I think it’s been awesome. I’ve had a wonderful reception from everyone and just excited to get to play in front of them again tomorrow.”

Kuchar started the day with a share of the lead and remained steady, shooting 1-under-par 69 Saturday. Currently sitting No. 1 in the FedEx Cup standings, Kuchar was atop the leaderboard for most of the day, but a bogey on No. 15 pulled him back into a tie with McIlroy and Simpson.

”It was a tough day out there,” said Kuchar. “It took a lot of good scoring to stay in the position I’m in. The support out here has been fantastic. The crowds have been great. The energy has been great. The Rink is completely unique.”

Simpson had a bogey-free 67 that helped him grab a share of the lead with 18 holes remaining.

Canadian Adam Hadwin is one-shot back, sitting T4 after moving day. A bogey on No. 2 made for an unfavourable start, but Hadwin clawed his way back into contention with three back-nine birdies. He is tied with Shane Lowry and Brandt Snedeker, a stroke behind the leaders at -12.

“I certainly got a lot more out of this round,” added Hadwin. “I really struggled with that left-to-right wind off the tee – couldn’t really figure it out. I’m just proud of the way I battled today. You know you have to go out and shoot a low one tomorrow.”

Mackenzie Hughes enjoyed his third straight round in the 60s – a 1-under par 69 – that dropped him one-spot into a share of 8th.

Nick Taylor started the day tied for third but carded a 73 to slip into a tie for 9th.