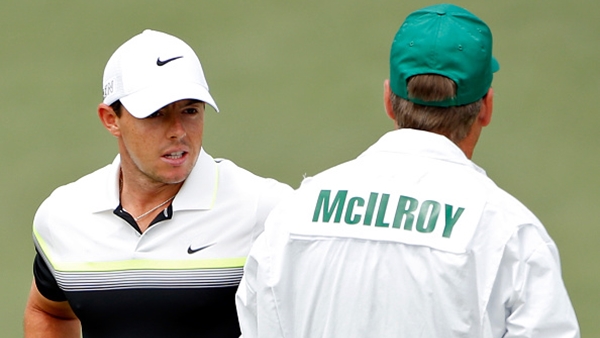 AUGUSTA, Ga. – Rory McIlroy roared off the starting line and almost as suddenly ran out of gas.

Two bogeys in the last three holes of what began as a very promising round at Augusta National Saturday may have doomed McIlroy’s chance of winning the Masters – and wrapping up a career Grand Slam in the bargain. With the memory of that finish still fresh, McIlroy put in a brief, almost-gloomy appearance in the interview room afterward.

No one has ever shot better than 63 in any major championship.

McIlroy still wound up with a respectable 68 that left him 6 under for the tournament. But he probably had a lower number in mind after playing the front nine in 32.

A booming 340-yard drive set up an eagle at the second and helped extend McIlroy’s productive run on the par-5 holes. After birdieing the three remaining par-5s, he’s 11 under in 12 opportunities, a strategy he laid out before touching down at Augusta.

“I’ve played them more conservatively. When I put myself in a good position off the tee, I just try to hit it in the middle of the green and take my two putts,” McIlroy said.

“A couple of times, once yesterday on 13, I hit it close and made eagle … I just played them a little more conservatively or smartly, and missed it in the right areas when I have and been able to get it down.”

But that wasn’t the case at either Nos. 16 or 18, where poor tee shots left him scrambling to hold onto those gains. At the 16th, he flew the bunker on the right of the green and couldn’t convert the up-and-down; at the 18th, he drove into a fairway bunker, left his approach short and missed a left-to-right 8-footer to save par.

McIlroy said the pressure of his pursuit of the career Grand Slam hadn’t distracted him, nor the fact that Jordan Spieth, who’s leading the Masters, has said he’d like to steal McIlroy’s No. 1 ranking and is suddenly getting close.

Instead, the Northern Irishman said most of the wounds he’s suffered trying to win here – like the triple-bogey he made at No. 10 while leading in 2011 – were self-inflicted.

“I definitely feel like I play this golf course better and better every year that I come here,” McIlroy said. “I don’t know, I just need to keep putting numbers up like I did today. I know I’m capable of it … just a few stretches of holes have held me back and that’s really been the case this year again.”