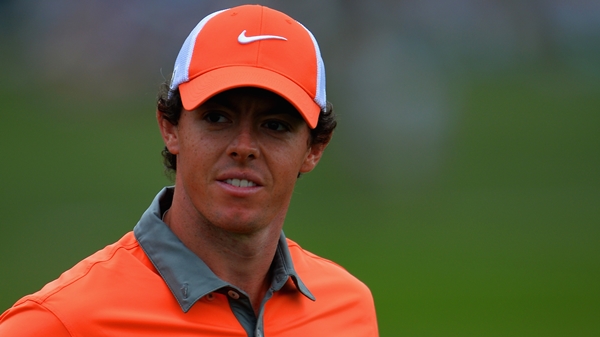 PALM BEACH GARDENS, Fla. – On the course where Rory McIlroy first rose to No. 1, he looked as if he might be headed in that direction again.

McIlroy swung freely and walked briskly on his way to a 7-under 63 on Thursday, with birdies on the last two holes at PGA National giving him a one-shot lead over Russell Henley after the first round of the Honda Classic.

If nothing else, it was big improvement from the last official round he played on PGA National.

McIlroy was 7 over through eight holes last year when he became so frustrated with mounting expectations and a slumping game that he walked off the course in the middle of the second round. He said it was a mistake that he would never repeat.

He apparently buried the past with his clubs, if not his head.

“It’s not something I really thought about out there,” McIlroy said. “Coming in this week, I knew that I was playing well and I just wanted to try and get off to a good start. … Regardless of what happened last year or where it is, it’s always nice to shoot a round like this and get yourself in the mix early.”

Tiger Woods wouldn’t know the feeling so far this year.

In first tournament in a month, Woods couldn’t make a birdie putt early and had to scramble for pars late in his round. A birdie on the last hole gave him a 71, leaving him eight shots behind.

“I hit it good starting out, hit it kind of scrappy in the middle and then hit it good at the end,” Woods said. “But it was just one or the other. I either hit it good and missed the putt, and then scrap around and make a putt.”

In his other two events this year, Woods was eight shots behind after the opening round at Torrey Pines and five shots behind at Dubai. He goes into the second round Friday outside the cut line.

Henley opened with five birdies and six holes before he cooled off for a 64. Past champion Rory Sabbatini, William McGirt and Jamie Donaldson of Wales were at 65.

Zach Johnson was four shots behind and thrilled about his 67. He hit two shots into the water on his way to a quadruple-bogey 8 on his second hold of the tournament. The former Masters champ followed with seven birdies to get back in the game.

“It was a day where it could have gone the other way _ quick,” Johnson said.

David Hearn of Brantford, Ont., also shot a 67. Mike Weir of Brights Grove, Ont., carded a 72, and Calgary’s Stephen Ames is another shot back at 73.

McIlroy has been shifting gears since late last year, which he closed out with a win at the Australian Open. He had chances to win in Abu Dhabi and Dubai, and he played well in a second-round loss to Harris English last week at Match Play.

But this looked like the McIlroy who won two majors, each by eight shots, bobbing along the fairways and swinging with no fear. It helped to make a few putts, such as the 25-foot birdie on No. 2 and a 45-foot birdie putt on No. 11. He had a few par saves that kept him motoring along, such as the up-and-down from 40 yards at No. 9, making a putt from just outside 10 feet.

“You can’t fake it around here,” McIlroy said. “You have to play well to shoot good scores, and I was able to do that today.”

McIlroy put last year behind him, though it was hard to ignore the turnaround.

He was the defending champion and No. 1 in the world last year, newly signed to a big Nike contract and struggling to break par. He also was in the early stages of leaving a management company for the second time in two years. It all got to be too much, and as he walked up to the 18th green at PGA National, he shook hands and headed straight to the parking lot. He said then he was “not in a good place mentally.”

Now he is playing well. He is adjusted to his equipment. He’s engaged to tennis player Caroline Wozniacki, who followed him around the golf course.

The finish didn’t hurt. The 24-year-old from Northern Ireland took aim at the flag over the water on the par-3 17th and made a 12-foot birdie putt. He finished with a fairway metal into the front bunker, and a simple shot to 4 feet for birdie on the par-5 closing hole.

But with every tournament, he’s moving in the right direction.

“I’ve reached a point now where I’m very comfortable with everything in my game and my swing,” he said. “I’m seeing shots the way I want to see them. When I do that, I feel like the scores are just a byproduct of all the hard work and making good swings.”

DIVOTS: Phil Mickelson, playing PGA National for the first time since he was an amateur, had two birdies and a double bogey for a 70. … Masters champion Adam Scott, in his first tournament in six weeks, opened with a 68. … Jason Allred, whose tie for third at Riviera enabled him to get into the Honda Classic, opened with a 75. Allred had not played a regular PGA Tour event since 2008 until the Northern Trust Open.