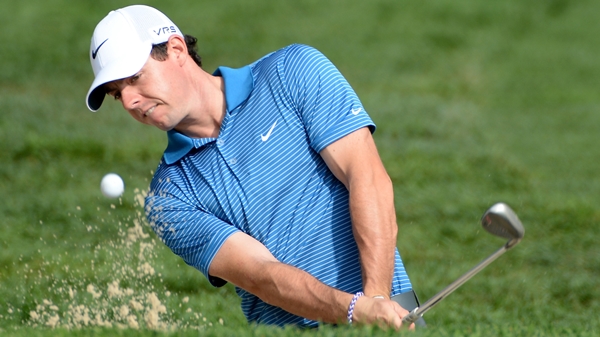 PARAMUS, N.J. – Rory McIlroy isn’t just biding his time for the next seven months until the Masters and his chance to complete the career Grand Slam.

Next up is the FedEx Cup and its $10 million bonus.

“It’s my next goal,” McIlroy said. “So I’m going to put everything into that.”

The FedEx Cup playoffs get underway Thursday at Ridgewood Country Club with The Barclays, the first of four tournaments in which the field size will be reduced each week until 30 players reach the finale at East Lake for the Tour Championship.

McIlroy has won his last three tournaments – two of them majors – and at No. 1 is starting to get some separation from the rest of golf.

He is the top seed at Ridgewood, but given these playoff events are worth five times the value of a regular PGA Tour event, that could be gone in one week. Because this is a Ryder Cup year, and the matches are overseas, the PGA Tour agreed to stage these playoff events in successive weeks.

Here are five things to look for at the start of the FedEx Cup playoffs:

MCILROY’S MISSION: McIlroy went wire-to-wire to capture the British Open and he won a tense back-nine battle at the PGA Championship to become the third-youngest player (25) with four majors. Take a bow, Boy Wonder.

Now get back to work.

“I could just say, `Look, I’ve had a great year, it’s been an awesome summer. I’m going to just see what happens for the next few weeks and not really work hard,'” McIlroy said. “But I want to finish the season well. I want to be up there in contention week in and week out. I feel like the season I had deserves a finish like that.”

TOUGHEST FIELD: The Barclays could make a case as the strongest and deepest field all year on the PGA Tour.

The strongest goes to the PGA Championship, which invited the top 100 in the world ranking. But it also has 20 club pros. The strongest and deepest probably is The Players Championship because all 150 players have a chance to win. But The Players includes winners from the previous year who are not in good form.

The Barclays features the top 125 players from the current year on the world’s strongest tour. Everyone is in good form and prepared for a big stretch.

RIDGEWOOD: Ridgewood Country Club figures to be a stronger test than the final major of the year. The rough is 3 inches and looks even longer and deeper in spots. Some of amateurs struggled to get shots back to the fairway. Jimmy Walker could only advance one shot with a 9-iron.

“Unless you happen to get a good lie or the rough gets matted down, it’s going to be tough to play out of the rough,” Rickie Fowler said.

MICKELSON AND MAHAN: Phil Mickelson and Hunter Mahan are the only players who can extend their streak of reaching the Tour Championship every year since the FedEx Cup began in 2007. Steve Stricker was on that list, but at No. 103, he withdrew with a hip injury and thus his season is over.

Mickelson moved up to No. 45 thanks to his runner-up finish at the PGA Championship. The top 30 make it to East Lake for the Tour Championship. Mahan is at No. 62, and his immediate goal is to stay in the top 70 after the first two events to advance to the third one. Mahan is the only player to have never missed a FedEx Cup playoff event.

FOWLER: Rickie Fowler is having one of his best seasons, considering he hasn’t won. He was runner-up in the U.S. Open and British Open. He had the lead on the back nine (briefly) at the PGA Championship. He had to settle for being the first player in history to finish in the top five at all four majors without winning one.

The byproduct of all this? He qualified for the Ryder Cup team for the first time (he was a captain’s pick in 2010), and he starts the FedEx Cup playoffs at No. 15. That’s important, because as popular as Fowler has become, he has never made it to the Tour Championship. This is his best chance yet.